Turning a NEXIS Project into a Company

Shawn Gaetano can still recall the first time he learned about the NEXIS Student Technology Lab at the iSchool. He was touring Syracuse University, and as he made his way to the third floor of 339 Hinds Hall, he peered into the lab and was instantly intrigued. He wasn’t even sure what he was observing, but something sparked his curiosity as he watched iSchool students collaborating and playing with different technologies. 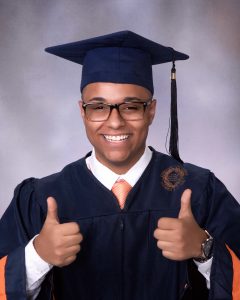 “NEXIS sits on the third floor across from the Dean suite and right next to a big meeting area. It’s kind of like a giant fish tank, so when people walk by, you can see what everyone’s doing, and it’s usually something extremely cool and creative,” says Gaetano. “When I walked by on my first Syracuse tour, something went off in my head like, ‘Wow, if I get into Syracuse, I definitely want to be in that club.'”

In 2018, Gaetano’s desire came true as he joined the iSchool and NEXIS. And within no time, Gaetano got to work on a NEXIS project, which would eventually morph into his company Solace Vision.

In its early stages, Solace Vision was a virtual reality (VR) environment Gaetano created to help people overcome phobias. He got the idea from a hospital in Pennsylvania that was using virtual reality to help burn patients with physical therapy. The hospital’s innovative use of VR intrigued Gaetano, so he spent his time at NEXIS primarily researching and playing with virtual reality. Eventually, Gaetano developed a VR environment that allowed participants to confront their fear of heights.

“What I did at the time was create an environment using Unreal Engine game development software,” explains Gaetano. “The goal was, we put a person on a skyscraper. They could choose a level anywhere from the ground floor, then in increments of five, all the way up to the 25th floor, which is the roof. The objective was to walk out onto a plank, grab a ball and then return it to a dog.”

This VR environment gave participants a safe way to confront their fears as they tackled different floors of the skyscraper. When Gaetano originally started the project, he wasn’t expecting to turn it into a company. He thought at most he’d use it as a senior thesis or capstone project. He presented Solace Vision at NEXIS Pitchout, an annual iSchool event where NEXIS members present projects to a panel. The presentation gave Solace Vision a lot of attention, which led the iSchool to encourage the project’s exhibition at various events such as a board of advisor’s meeting and alumni brunch.

News continued to spread about Solace Vision, and that’s when a friend of Gaetano’s reached out and encouraged Gaetano to look into Blackstone LaunchPad, Syracuse University’s innovation hub. Blackstone LaunchPad helped Gaetano get in front of mentors and advisors who provided the needed advice to take the project to the next level. And sometimes the journey to the next level meant facing the difficult reality of scaling a business.

One mentor had a difficult conversation with Gaetano that scaling a business as a virtual reality environment would be challenging. The mentor explained that someone would have to make edits for each virtual scenario to sell the project as a phobia environment to a hospital, practitioner, or therapist. And to make those edits, they’d need a team of developers available at all times. As a startup, Gaetano didn’t think the project could efficiently scale, so Solace Vision pivoted into a low code tool for virtual environment development.

“To put it into perspective, if you think about a game like Fortnite, it took Epic Games around six years to develop Fortnite as many people know it. And a lot of the years went into developing the virtual environment,” explains Gaetano. “What we’re trying to do is make a tool so somebody could build, for example, a large forest environment that has X amount of trees for a multiplayer game, and they don’t have to touch a single line of code. It’ll automate and streamline that process.”

Ultimately, Gaetano says he would like to grow and pivot Solace Vision back into the healthcare space and sees the tool he’s building now as a stepping stone for helping him scale his original idea. “What we’re trying to build now is essentially a tool that would have helped us immensely back then to build these environments and scale them within a few hours,” says Gaetano. “We’re creating a tool for people to build virtual environments with really no experience. Anybody could pop in the tool and type in a few sentences on an environment they want to make and have it created for them. I think the path we’re on now has a lot of promise. Not only within the product itself but also being able to one day use our tool to loop around back to the main mission, which was to help people out with virtual reality and healthcare.”

Gaetano graduated from Syracuse in 2020 and continues to work on growing Solace Vision while also working full-time as an Intelligent and End to End Automation ITDP with Eaton. His success comes from a mix of dedication to his passion for virtual reality and technology, along with hard work and an entrepreneurial drive.

Gaetano also gives credit to his NEXIS experience, a place he felt destined to join and is glad he did. “NEXIS taught me way beyond technical skills,” says Gaetano. “You could open up YouTube and find a video on how to learn Python, but something that’s not as easy from a video is learning how to collaborate, problem-solve, social skills, presenting a project. That stuff, you can’t learn from a YouTube video or a course. You have to do it. And that experiential learning was pivotal to my success.”