Ivy League to iSchool: A Researcher’s Progression into Library Design

Growing up in a family that placed a great deal of value on education, Katerina Stanton was no stranger to libraries. As a child, her mother pursued a doctorate in anthropology, and she remembers a lot of time spent in the quiet studious settings that have become the backdrop of much of her career. Stanton dreamed of a career that combined her innate passions for organization, information, research, and the precision with which information is communicated, with her general curiosity, and determination to excel at school; now she is a doctoral candidate at the iSchool. 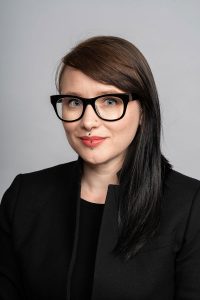 At Phillips Exeter Academy, Stanton won awards in both Latin and Italian translation competitions. She had spent her junior year abroad in Italy, and brought back with her a hunger for knowledge, and appreciation of language, which led her to pursue a B.A. in Classics and Classical Languages, Literatures, and Linguistics, from Cornell University, in Ithaca, NY. It wasn’t until working in the libraries of Cornell that Stanton seriously considered Library Science for a profession.

After receiving her undergraduate degree, Stanton decided to stay in Ithaca to begin her career, but it wasn’t easy. She was applying to countless library jobs in the area and earning a living by working in restaurants and as a freelance editor and proofreader. She eventually had an opportunity. “I finally broke through and got a position at Mann library, which is the second- largest library at Cornell. I was a kind of jack-of-all-trades because I was the evening and weekend supervisor. So I had to do things like manage circulation, manage students, answer reference questions, and process interlibrary loans,” says Stanton. Because of the amount of exposure to the many aspects of maintaining a functioning library, she developed a holistic view of how all the parts of the library need to work together as a system, as well as a healthy respect for the practice of library science as a discipline.

Stanton was looking for a prestigious and well-rounded master’s program that would complement the amount of experience she had already accumulated working in academic libraries for several years in order to further her career. Hearing about positive experiences from colleagues at the library, Stanton applied and was accepted to Syracuse University’s School of Information Studies for its M.S. in Library and Information Science program.

However, halfway through her master’s degree, Stanton discovered that her true ambitions lay beyond completing the masters program and practicing librarianship; she wanted to sit at the tables that run library systems and have an effect on larger policy changes. That’s when it clicked for Stanton – in order to get the opportunities she was envisioning, she decided to look into furthering her education. Stanton began investigating doctoral programs and discovered the work of Dr. Rachel Clarke, an Assistant Professor at the iSchool.

“Rachel was really focused on librarianship as a design profession, rather than a science. I think it’s a valuable profession, but I do think that it is more design-oriented than scientific. And so reading her work, it was all kind of like serendipity. It felt like we agreed on a research path,” says Stanton. She continued to research different programs into the night, but knew that a foundational part of picking the right doctoral program was finding an advisor that she really wanted to work with. She was certain she had found that in the work of Dr. Clarke.

Thus, as a life-long go-getter, Stanton emailed Dr. Clarke to set up a meeting. She wanted to meet face to face with the woman whose work was so energizing to her own educational ambitions. She says, “I drove up to Syracuse from Ithaca and sat with her for an hour and asked her about her research. From that, I could only surmise Dr. Clarke thought I was a worthwhile investment as a Ph. D. student.” Inspired by the conversation, Stanton decided that day to apply to the iSchool doctoral program.

Not long after being admitted to the Ph.D. program in Information Science and Technology at the iSchool, she was assigned as Dr. Clarke’s Research Assistant. By the time Dr. Clarke became Stanton’s official advisor, Stanton felt like she was at home in the program. She appreciates how the culture of the iSchool allows students to live a full life and still gain the most value from their education. “The iSchool has healthy expectations of students. Rachel has been wonderful about healthy boundaries, about a good working relationship, and including me on projects in a way that I didn’t expect,” says Stanton.

Her research with Dr. Clarke focuses on many aspects of librarianship, including design, invisible labor, and knowledge organization. Utilizing the frameworks of feminism and social justice, they are currently investigating emotional labor and empathy in librarianship. Together they conducted a diversity audit of library educational programs utilizing critical race theory. One of Stanton’s favorite projects was the analysis of ‘Design’ as a topic in classification systems. Stanton sees this work as an ideal blend of scientific research and design.

Even if Stanton does not ultimately end up working for a library, she will probably be spending a lot of time in them for years to come. Stanton now prefers the scientific research of librarianship as a profession over the practice of librarianship, and values how the iSchool has clarified her professional ambitions after completing her doctorate. Viewing her educational path as a robust tour of her own strengths and passions, Stanton sees beyond the day-to-day, and looks forward to expanding her horizons into new projects, and a rewarding career.