Jen Graney always considered herself a library user. As a kid, she’d gone to libraries and grew particularly appreciative of them while living in Rochester in the early 2000s. Graney’s apartment at the time didn’t have wifi, and smartphones weren’t yet commonplace, so she’d visit her local library to browse the internet and rent DVDs. 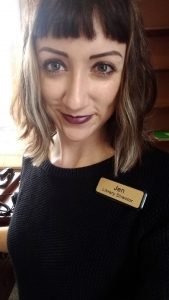 While living in Rochester, Graney worked as a staff writer at City Newspaper, where she wrote a nightlife column and arts and entertainment pieces. Around 2010, Graney left her job as a writer and moved to Syracuse, where she veered from her journalism background and worked as an Associate Program Manager for Virtucom Group.

“I ended up doing taxonomy work, which was something I had never heard of,” says Graney. “I was designing hierarchies for different websites. It was information organization, and I wanted to learn more about it. It felt like it aligned my interests in personal learning and wanting a career path that was going to help others.”

As a lifelong learner, Graney wanted to discover more about information management and decided to pursue a master’s degree. She applied to the Library and Information Science (LIS) program at Syracuse and was accepted. Graney was excited to start digging into library science, but it had been a while since she’d been in school. She decided to ease into the program and started with a few night classes. Within her first semester of night classes, she met many people and found the material to be relevant to her current role as a project manager. After a few night classes, Graney felt comfortable matriculating into the full program.

During Graney’s first full semester at the iSchool, she had the opportunity to visit some of the archives. The first archive that stood out to her was the Belfer Audio Archive. Graney had a background in music and enjoyed processing and cataloging 78s and LPs. She also had the opportunity to write articles for the Syracuse University Magazine to promote Belfer and showcase the fantastic work the archive was doing.

Graney continued to immerse herself in the LIS program. In addition to Belfer, Graney worked in the University Archives, was a research assistant for Dr. Yun Huang in the SALT lab, was the Book Donations Coordinator for Fayetteville Free Library, and even had the opportunity to shadow a prison librarian. She wanted to learn about all types of librarianship. She knew she was a good writer and project manager and that she liked information organization, but working for all these different archives and libraries helped Graney explore all her options.

“I think my most highly-valued thing about the LIS program is the connections you can get as a student worker on campus,” says Graney. “The hands-on, experiential, in-the-moment learning helps you see if you’re interested in certain types of librarianship or archive work, as opposed to just learning about it in class.”

Toward the end of her time at Syracuse, Graney was introduced to the Central New York Library Resource Council (CLRC). She discovered CLRC through an iSchool capstone course where she worked on a digital inclusion initiative for them. She noticed they had an open role looking for someone with a master’s in library science. Graney hadn’t finished her degree yet, but she knew she was the right person for the job. She applied and eventually earned the title of Research and Development Librarian.

“When I came on, I was still finishing up my library degree, but I was able to recognize the opportunity and jump on it,” says Graney. “That’s something I try to tell everybody. Even if you don’t quite meet the requirements, you should still go for it if you feel like that’s a job for you. You can show that you’re a good match. CRLC works with all different types of librarians, which is why I wanted the job. I had had all of this exposure and experience and thought it was somewhere I could help out at.”

Her role at CRLC involved researching, planning, and creating materials to promote continuing education for librarians in four different counties in the Central New York area. The part involved much project management and administrative work, which Graney had experience with from her previous roles.

Graney stayed with CRLC for about a year before finding her way back to Fayetteville Free Library, but this time as a librarian. When she was hired, she planned on helping with grants and research, but she noticed what the library needed was another reference librarian, which Graney happily took on. This time around, Graney got to help patrons while also working on collection development, specifically within music and movies.

Graney spent almost two years at Fayetteville before transitioning to Library Director of Cortland Free Library in January 2020. “I’m always trying to challenge myself and learn something,” says Graney. “I interviewed for one or two other director positions during my time at Fayetteville. I felt like I could put my project management experience together with my librarian experience to be more on the administrative side, helping librarians and the library team excel. I saw the opportunity in Cortland. I saw the library and thought I could make a difference here. It seemed like the next natural transition.”

In her new role, Graney supports the staff to ensure they’re getting what they need to perform their jobs the best they can. Graney is also the direct contact to the board of trustees and manages big picture plans for the library.

With everything Graney’s accomplished in her career in library science, she’s thankful for the connections and experience she gained from the iSchool. Graney notes there is a barrier to entry in needing a master’s degree to get into these library science positions, but she’s glad she could pursue her degree.

“I feel like once I was on the path and was meeting people that were passionate about what they were doing, it really motivated me,” says Graney. “I’m so thankful the iSchool gave me the opportunity and experience to become a director and make a difference.”