The Huangs: A Donor Story of Exploration, Risk, Perseverance, and Love

Theresa and Theodore Huang were both lifelong learners. Born in China in the 1930s, each took incredible paths throughout their lives and careers.

Theresa Huang G’58 was born in Nanjing, China, but moved often between 1937 and 1949 because of the Sino-Japanese War and the Chinese Civil War. Theresa and her family spent time in Hunan and Sichuan Provinces in China and lived in Vietnam and Hong Kong. In 1950, the family moved to Taipei, Taiwan, where Theresa finished high school and attended the National Taiwan University (NTU). 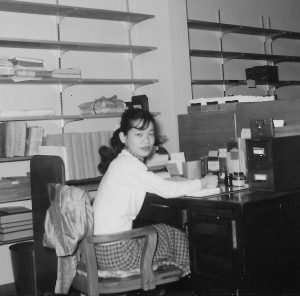 Theodore was born in Changsha, China. He received a BA in sociology from Fuh Tan University (now Fudan University) and spent a brief time studying in Europe. He moved to Taiwan in 1948, where he taught at Tamkang College (now Tamkang University) before his position at the National Central Library, where he met Theresa.

After the two met, Theresa won a scholarship to study in the United States. This is when Theresa made the difficult decision to maintain a long-distance relationship while starting her graduate studies at Syracuse University’s School of Information Studies in September 1956.

She graduated in 1958 with a master of science in library science and moved to Cambridge, Massachusetts for a cataloger job at Harvard University.

Though her studies and career kept her in the US, she and Theodore maintained their connection. Theodore served as the secretary-general of the Library Association of China in the 1950s and spent much of his time in Taiwan writing poems. He was considered a leading poet of modern China and an initiator of the modernist poetry movement in 1950s Taiwan. (A retrospective of his works was published in 1980.) He also published translations of European and American poetry, most notably a Chinese translation of Rainer Maria Rilke’s work.

Despite his professional success in China, Theodore put it aside and came to the United States in 1959 to be with Theresa, and he married her at the end of that year. He earned a Ph.D. from Rutgers University and held positions as a library director, first at Tri-State College (now Trine University) and later at Fairleigh Dickinson University.

Theresa spent two years working at Harvard before heading to New York City for the Brooklyn Public Library. From 1960 until she retired in the late 1990s, she held various librarianship positions with the Brooklyn system, including children’s services specialist, district librarian, branch librarian, and regional librarian.

“Both Ted and Theresa were inquisitive lifelong learners,” says the couple’s nephew David Mao. “They always seemed to be collecting information. They borrowed or acquired all sorts of books, subscribed to a variety of publications, and read voraciously to keep up on a wide range of topics.”

After graduating from Syracuse, Theresa was a loyal donor for 25 years. When she passed away in 2007, Theodore continued with generous annual gifts until his passing in 2018. David took over upon Theodore’s passing, and he decided to use his uncle’s estate to create the Theresa C. and Theodore S. Huang Endowed Fund to support career-focused experiential education opportunities for graduate students in the Library and Information Science Program. Through this fund, David is hoping to continue Theresa and Theodore’s legacy, and celebrate their memory with library students for many years to come.

“Ted and Theresa were always willing to help others and quick to provide any assistance needed,” shares David. “A neighbor told me that she once mentioned a homebound relative to Theresa in passing. To the neighbor’s surprise, Theresa started delivering reading materials to the neighbor to pass along as a way for the relative to stay engaged with the outside world. Ted routinely would check on another elderly neighbor, even as his health declined and he needed more assistance with his daily activities. To me, these examples demonstrate their commitment and desire to make a positive difference in others’ lives.”

The School of Information Studies is honored to carry on the Huang’s legacy of supporting libraries and librarianship, and are grateful to the Huang family for their continued support of our mission in the name of two remarkable people.