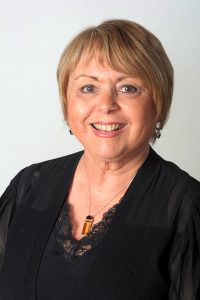 Ruth Small received her doctorate in instructional design, development, and evaluation from Syracuse University’s School of Education and was on the faculty of the iSchool from 1989 – 2018. During her tenure, she served as director of the Library and Information Science program for three years and the LIS-School Media program for 22 years. During that time, she received four teaching awards, including “Teacher of the Year” (SU Alumni Assoc., 2004), “Graduate Professor of the Year” (iSchool, 1996), Excellence in Online Teaching Award (WISE, 2015) and SU’s highest teaching award, the Meredith Professorship for Teaching Excellence (2006). In 2001, she created the iSchool’s first distance learning program and the nation’s first web-based LIS graduate program.

Ruth is the founding director of the iSchool’s Center for Digital Literacy, an interdisciplinary, collaborative research and development center, and has been awarded 25 external grants, to date, for which she has served as PI or co-PI. Her research has focused on the motivational aspects of information use by both children and adults in a variety of contexts and she has authored or co-authored more than 100 publications, including eight books, and has served on the editorial boards of four professional journals. Her research earned her the ALA Carroll Preston Baber Research Award in 2001 and the AASL Highsmith Research Award in 1997.

Dr. Small continues to receive grant funding for her projects on youth innovation and on libraries and disabilities and to publish on these topics in professional journals and books.