A study looking at data surrounding the impact of demographic variables such as gender, ethnicity, and socio-economic background on the outcome of scientific training between mentors and mentees is underway at the School of Information Studies given a grant the National Science Foundation (NSF) recently awarded to Assistant Professor Daniel Acuna. 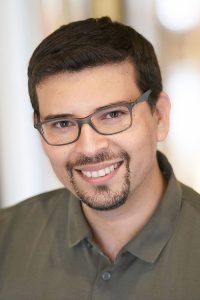 The project, “Collaborative Research: Social Dynamics of Knowledge Transfer through Scientific Mentorship and Publication,” received $176,475 from the National Science Foundation’s Science of Science & Innovation Policy program. Acuna, as principal investigator, with Stephen David of the Oregon Health and Science University, is using the funds for the next two years to look at the effects of gender and race of mentors and mentees on scientific careers.

“We are trying to understand how social factors affect the social dynamics of knowledge transfer through scientific mentorship and publication, such as whether there is a difference if females work with females, compared to females working with male advisors, for instance,” Acuna explains.

Mentorship is an essential part of the training of scientific researchers, he says, because in addition to providing direct intellectual benefits such as new learned skills and concepts, mentors also provide their trainees with indirect social benefits through engagement with the mentor’s social networks. A preliminary analysis of gender replicates previous reports of bias toward representation male researchers, especially at more senior career stages, Acuna notes.

“This aspect of training may play an important role in determining access of under-represented groups to scientific careers. Additionally, since most researchers spend several years training under just one or two graduate and or postdoctoral mentors, those relationships can have life-long impact on scientific careers,” he adds.

The project will develop a large crowdsourced database of academic mentorship relationships, and links that data to databases that measure scientific productivity (publications and grants) and demographic variables. Graph theoretic and semantic tools will be used to determine if and how demographic variables, associated with both of the mentor and trainee, impact scientific productivity.

The research will use semantic analysis of publication data to develop the concept of the “intellectual neighborhood” of mentors and incorporate this into the modeling of career outcomes. Data will be made open access for general use by the public, providing a new resource for studying the dynamics of research fields.

Additionally, the grant contemplates funding for a Summer School on Science of Science (S4). The school will focus on problems and opportunities in the nascent field of science of science, presented from the perspective of prominent scholars in that arena. Acuna expects 30 to 40 doctoral and postdoctoral students to visit the school to learn from these researchers in the mornings then apply that knowledge through afternoon hackathons. Scholars will work with the dataset produced and enrich it through their own experiences and analyses.

The NSF Science of Science & Innovation Policy program area supports research that advances the scientific basis of science and innovation policy through the development of models, analytical tools, data, and metrics that can be applied in the science policy decision-making process and the use and allocation of scarce scientific resources.

Acuna also has been awarded two additional grants from the Office of Research Integrity from the U.S. Department of Health and Human Services.

One is an extension of funding for his work on automatic detection of fraud in scientific images: “Human Centered Automatic Tracing, Detection, and Evaluation of Image and Data Tampering.”

The second is an ORI conference grant for a new initiative, “Computational Research Integrity Conference (CRI-CON).” Acuna is organizing that event for next year in Washington, D.C. to bring together researchers to examine the idea of using artificial intelligence to aid in detecting fraud in science.