Alabama. The students were managed by a recent iSchool alumni, Devansh Khakhar, and collaborated with him remotely from a conference room in Hinds Hall throughout the summer.

Khakhar is Director of Business Intelligence and Product Innovation for ProHealth Group, Inc., his second job in healthcare after graduating with a MS in Information Management from the iSchool in 2020. The opportunity to create an internship program for current master’s students arose when Khakhar was approached by Vaibhavi More, a second-year student in the master’s program currently pursuing a MS in Information Management. More was introduced to Khakhar when he participated in Professor Ingrid Erickson’s class as part of an alumni panel during the Fall 2021 semester. During the panel, Khakhar touched on his own experience of failing to find an internship during the summer between his first and second year. An internship is a requirement for master’s students to graduate and “when you don’t have one,” Khakhar said, “you are almost lost and start questioning how you are going to graduate.”

Several months later, More recalled Khakhar’s story and decided to get in touch to share her own experience of struggling to find an internship. She thought she might find solace in the common background she shared with Khakhar. “Being an international student away from home . . . that just felt really overwhelming to not have an internship,” said More.

But the story does not end there. 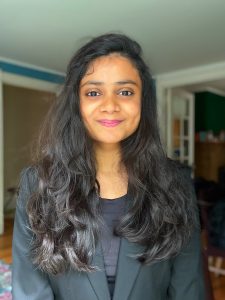 Following their discussion, Khakhar thought about how he could help now that he was able to do so. He had just started a new position and “saw an opportunity to set up an intern program at my company and see if that’s something that would be possible.” Khakhar then pitched the idea directly to his CEO believing that the program would be a win-win for all involved. The company could benefit from the valuable work provided by the interns and the interns could gain work experience and an opportunity for professional growth.

More was the first student to join the intern team, and then recruited four of her classmates to join her over the summer. “I knew a few people who were in the same position as me,” said More. “Summer is a very long period . . . you would not know what to do during those three months especially when people around you are busy working towards their career. One-by-one I got four of my classmates with me on this team.”

The interns spent the summer in hybrid roles as both business and data analysts. “Our main aim was to make sense out of data and generate insights,” said More. “We used SQL language for the data operations and Microsoft Power BI for creating dashboards out of the data, displaying key metrics that would affect the business operations.”

At the end of their summer collaboration both Khakhar and More agreed that the experience was a success for both the interns and ProHealth Group, Inc. Indeed, such a success that Khakhar was able to hire a pair of interns to work with him into the fall semester. “I was able to pitch two of the interns to continue as paid co-ops. We proved ourselves over the summer and the CEO saw something in them and agreed to continue,” said Khakhar. Currently, More is working part-time for ProHealth Group, Inc. as she finishes the final year of her master’s program at the iSchool.

Khakhar is hoping that this internship model might be inspiring to others, particularly his fellow alumni. “This can act as a model for smaller companies that alumni work at,” said Khakhar. “Students can start as unpaid interns and set up a program that can benefit the iSchool year over year.” Khakhar hopes to benefit current and future students seeking internships by showcasing how possible it is to create and implement an alumni-generated intern program. “There is a gap between students at the iSchool, especially graduate students, and alumni. I believe there are alumni at companies who wouldn’t mind taking unpaid interns.”