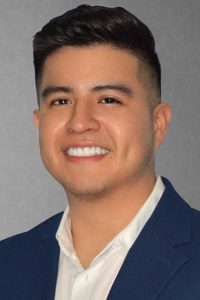 Rodney Morocho arrived at Syracuse University as an undeclared biology major on the pre-med track in the College of Arts and Sciences. He changed his major several times while trying to find his calling within this school. He knew that he wanted to stay in the STEM field, but found it difficult to fully commit to the hard sciences.

Undeterred from his quest to find the right program to fit his strengths and interests, and determined to gain a marketable skill set to bring to his future career, Morocho continued to explore what Syracuse had to offer. He decided to declare Spanish as his first major, but he still had the bandwidth for another course of study. For his second major, Morocho was looking for a subject that would thoroughly capture his interest while it prepared him for the demands of the professional workforce.

In the beginning of his sophomore year, he recalls having a conversation with a friend on campus who was positively describing an experience she had at the School of Information Studies. He decided to take the introductory course, and was immediately hooked on the relevance and versatility of the curriculum. The iSchool had slipped under his radar for a couple of semesters, but he was excited to finally find out what was happening there. During that semester, Morocho attended an Intra-University Transfer info-session for students interested in internal transfers, and he found out what he needed to do to get into the iSchool.

Morocho studied abroad in Madrid for the first semester of his junior year, and found out that he was accepted into the iSchool just before returning from that trip. “I was so thrilled. I was more excited knowing that I was going to come back from abroad and go to the iSchool, than I was about going abroad in the first place.” says Morocho. With his Spanish major well underway, and his upcoming concentration in data analytics at the iSchool now official, some of the pressure that he had been putting on himself started to dissipate.

He remembers feeling a little overwhelmed when he got back and started at the iSchool the spring semester of his junior year. But with most of his Spanish major coursework already finished, he decided to stack up on iSchool credits to get as much done in his data analytics studies as he could. Adding to the weight of Morocho’s new coursework and heavy academic load, he no sooner returned from Spain, then the Syracuse campus shut down due to the pandemic.

In a moment of reflection, Morocho reveals that he was uneasy about having switched majors so many times, and about pursuing an international experience instead of an internship. He was having some misgivings about entering the competitive workforce with his resumé as it was. In the time between his junior and senior year, he was determined to promote himself despite his own self-doubt about the lack of internship experience. He knew he had plenty of interesting experience, initiative, and education; he just needed a strong network and to hustle harder than anyone else.

“I networked as hard as I could on LinkedIn,” says Morocho, “LinkedIn became my best friend at this point. I was reaching out to recruiters, and alum, asking them for tips and advice. I was asking them what career moves I could make with my iSchool concentration in data analytics.” This effort landed him a lot of good advice, and his first conversation with an IBM recruiter. That conversation did not turn into an interview opportunity with the company this time, but it got his foot in the door for the future.

Morocho wanted to work for IBM since he was a little kid. He remembers the first computer that his dad brought home was a beautiful shiny box with an IBM logo on it. When they set it up, he was in awe of the possibilities that had been dropped on their family desk. As a young-adult in college, becoming more aware of the business world and studying parts of the tech industry, Morocho’s interest in one of the original computing companies grew. He says, “Seeing how IBM became this huge company, the presence that it has, and their inventions, made me want to reach for that, and become a part of that community. That became my overall goal.” He goes on to describe it as an accomplishment that he has been working towards for a long time.

Morocho channeled his professional doubts and desires into motivation for getting as many interviews and job offers as he could. He became thrilled by the process of interviewing and choosing the best job. He turned what could be a stressful series of events into a series of opportunities to learn and hone his own interview skill set. He didn’t jump at the first offer, but he kept showing up to meetings to learn from the gatekeepers of his industry. After many interviews, and a couple of job offers, Morocho was well-prepared when he finally got through the recruiters, and gained an opportunity to sit down for an actual IBM interview. They wanted to hire him. Morocho now holds the role of Associate Business Transformation Consultant at IBM, and couldn’t be happier with the way it all turned out.

He credits the Career Services Center at the iSchool with helping steer him through his transition from college to career in immeasurable ways. Through the use of workshops, interview training, resumé assistance, and other practical preparations, Career Services provided him with many valuable resources as he was striving to connect with mentors and employers. That support allowed him to extend beyond his comfort zone and grow into the type of qualified and confident professional that he is now. His time immersed in the iSchool subject matter, and the goal-oriented exercises with Career Services, have had a latent influence on his decision to continue his education with grad school in a management of technology program.

Morocho tackles his fears and own perceived ”shortcomings” with fervor and determination. His positive attitude exudes through his passion for making the most of learning opportunities. Many of the soft skills needed for his professional role now, Morocho credits to the collaborative nature of the iSchool’s approach to education. He notes that there were many opportunities to practice leadership and management skills through thoughtful classwork and projects. “Despite not having that internship experience, I used my project experiences from the iSchool to leverage my interview processes. It all felt like smooth sailing.” says Morocho.