Many students discover the iSchool through a Syracuse tour. They’re attracted to Syracuse, decide to visit the campus, and stumble upon the iSchool’s friendly community and expansive academic offerings. Bobbi Whitney’s intrigue for the iSchool was similar to many students, but her introduction to the iSchool happened in high school. 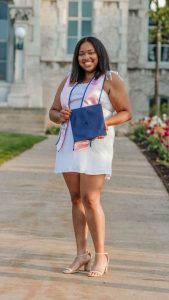 Whitney participated in IT Girls, a program geared toward high school girls to build interest in STEM. The iSchool’s blend of technology and business helped Whitney envision a college experience where she could indulge in technology while also developing her communication and people skills. “The iSchool was so different from everything I applied to,” says Whitney. “I liked the combination of technology and business and how applicable it was to so many different fields and industries. I was a senior in high school. I had no idea where I wanted to end up, so it was nice to have the flexibility.”

Whitney had some nerves about attending a large school like Syracuse, but those nerves were put at ease when she met her RA. Her RA played a critical role in adjusting to college, something she’s thankful for looking back on as a senior.

Her relationship with her RA encouraged Whitney to give back to incoming students. She wanted to help them the way her RA had helped her. She applied for an RA position and worked as an RA her sophomore year in the same dorm she lived in as a freshman. “It was nice to give back in the same way others helped me,” says Whitney. “It was one of the best experiences. I did it for a year and a half, and I’m still friends with some of my residents.”

Whitney wanted to continue giving back to the school, so she became a peer advisor. “Being a peer advisor, I think that was one of the most powerful things I did. It was nice to have a job on campus where I can see the results. I would see prospective students in information sessions, and then I would see them attend Syracuse. And it was gratifying to see how the work we’re doing happens.”

In addition to being a role model, Whitney was also an accomplished student. She was named one of the twelve 2021 Syracuse University Scholars, the highest undergraduate honor that the university bestows. The award was for recognition of her academic excellence and her research with Dr. Jennifer Stromer-Galley.

“It was a big surprise that I won because I never really looked at myself as a researcher,'” says Whitney. “It was nice to see the things I had done for the university were getting recognized. And it was nice to see the research I was doing was innovative and interesting. It definitely opened up my mind for future research.”

And it wasn’t just Syracuse who recognized her talent and ambition. Toward the end of her senior year, Whitney saw a consulting position open at IBM, one of the nation’s leading multinational technology companies. Whitney had visited IBM during a high school trip. Everything about the company stood out to her, and she dreamed of someday working there. After reading the job description, Whitney realized the education she received from the iSchool had helped her meet all the requirements. So, she decided to apply and got the job.

“I’ve had a dream of working for IBM since high school. I was like, ‘Oh, it’d be so cool to work there,’ but never thought it would happen,” says Whitney. “Honestly, I feel like I just kinda got lucky enough to get an interview. I guess the rest is history. It all kind of just fell into place.”

With a job lined up after graduation, Whitney can sit back and enjoy her final moments as an iSchool student. It’s bittersweet for Whitney, but she’s grateful for the time she spent at Syracuse. “Overall, I’m super thankful for the iSchool. I think if I had been in any other school, I would not have been as happy with my college experiences,” says Whitney. “I love Syracuse. It’s nice to have something so hard to leave. I’m already thinking about what alumni events I am going to come back for. I can’t wait to be back. I absolutely love it here.”