Understanding Data and Making Herself Invaluable 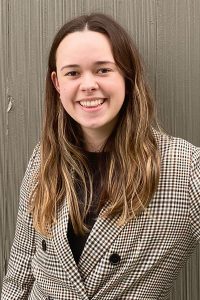 While recently looking back at some of her mementos from high school, Maeve Rule came across a form she used during an early college-exploration meeting with her guidance counselor, and the only school written on the paper was Syracuse University. Growing up in Upstate NY, attending Syracuse had always been her dream. Now it has become a reality.

Rule joined the School of Information Studies in 2016 and declared a major in Information Management and Technology, with a concentration in digital retail strategy and web design. She also took on a minor in retail management through the Whitman school.

As her interests were evolving, Rule realized that she wanted to build a career that would put her to work at the intersection of retail and technology. Growing up outside Cooperstown, NY–the home of the Major League Baseball Hall of Fame–she spent summers working for local baseball memorabilia businesses. Through these jobs she gained a lot of experience with web design, SEO principles, and how to move products through platforms like Ebay. In high school she hadn’t realized how valuable these work experiences would be to her future career, but now sees that exposure to business technology as one of the greatest stepping stones of her early working life. Cutting her teeth with SEO and building product listings for Ebay established skill sets that have been a focal point in every interview she has had, and now in the full-time professional setting of Amazon, she continues to pull from that same toolbox on a regular basis.

Even though her early summer job experience would ultimately prove fruitful, Rule knew that she needed to gain a greater variety of work experience to round out her resume. She wanted a resume that reflected a breadth of knowledge and experiences. She joined the team at the  Daily Orange – the number one independent student paper in the country. Starting as their Director of Social Media, she then pivoted into some web design work as Digital Editor, and finally became the Senior Staff Data Analyst. By the time she was fully onboarded with the paper, she was working full-time, was a full-time student, and had an off-campus job as well. Looking back at that time in her life, she has no regrets about pushing herself that hard. Rule sees this portion of her time at Syracuse as the most valuable aspect of her learning process. She emphasizes the importance of trying new things and says, “Learning how to be out of your comfort-zone, and still figuring out how to effectively contribute, is a really big deal.” She credits this philosophy for preparing her for life after college more than any other singular experience.

Rule also worked as Lead Peer Advisor for the iSchool. She helped to coordinate all 50 of the peer advisors of the iSchool, as well as contributing to general recruitment efforts. Rule was instrumental in helping several “IT Girls”–a program designed to get more women involved in STEM education–join the iSchool. She enjoyed this role and continues to stay in contact with some of these women, especially those who are considering applying to Amazon.

Rule’s first formal internship was with Amazon during the summer of her junior year. In this role she served as Sales Representative Intern. This was a great opportunity for her in a number of ways, but more than anything, it gave her the chance to work in an office setting with many professionals who could help her identify and achieve her own career goals and pursuits. This internship led to a full-time position after her graduation and due to the timing (pandemic) she was glad to have had that in-person experience, because she was now adjusting to working from home.

The day before she was scheduled to move to Seattle the pandemic restrictions changed and she ended up having to make the move all by herself without the help of her family. She showed up in a new city–on the other side of the country–and was immediately confined to her new home because the pandemic was at its peak across the nation. Fortunately she had the help of a former iSchool student living in Seattle. He was integral to her success in her previous internship with the company, but now he was helping her get settled in her new life in a new city.

Now with a full-time position in Amazon’s Sales and Business Development division, Rule works exclusively with sellers of handmade products. Although her current role is not strictly technical, she often finds that she is using the technical aspects of her iSchool education to aid her less tech-savvy clients. “The world is at a point right now, where no matter what job you’re in, if you have tech skills you’re going to be able to use them in some way. Being able to understand data is invaluable.” says Rule.

One of the biggest takeaways from her time at the iSchool continues to be the alumni network. She was first introduced to the internship opportunity at Amazon by an iSchool graduate who had been through the same program and posted a link about it in the Peer Advisor group chat. After seeing his post, Rule decided to apply, which led directly to her current job and life in Seattle. Wanting to pay-it-forward, she did the same thing and posted the internship in the group chat. She has helped another fellow iSchooler follow a similar path from internship to a full-time job with Amazon. Three students, in as many years, and with each other’s help, followed almost identical paths to establish their footholds in the professional workforce. These three even got together to watch the Syracuse Men’s Basketball team when they made it into the Sweet 16 last year.

Rule has been involved with the Peak2Peak program offered by Syracuse University. When she was an intern she hosted the students who were doing the tour of companies in the Pacific Northwest, and last year hosted the virtual meeting of the program. Although she didn’t participate in this particular program when she was a student, she does see great value in the exposure that it provides to all kinds of different company cultures, as well as allowing students an intimate view inside the workplaces they will be trying to land jobs with in the near future. Remembering similar programs she traveled with, she says, “I highly recommend these programs. Those trips really help you figure out what type of company you want to work for, and what your priorities are, because you get so much exposure in such a short amount of time.” The recipient of so much valuable guidance from alumni during her own professional ascent, Rule appreciates the chance to help current students make the most of their iSchool education and vast career opportunities.