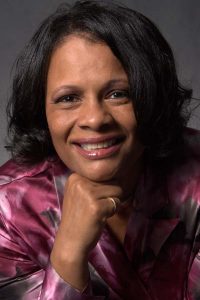 “It’s our food supply!” Michele Washington exclaims, “We’ve got to make sure that our food is protected.”

As the Senior Agency Official for Privacy for a government agency, Washington is on the front lines of protecting arguably our nation’s most important asset – the farms, companies, organizations, supply chains, and delivery mechanisms that make it possible for our citizens to eat.

Washington has learned more about the domestic food industry than most people would ever want to know, but it has been her responsibility to deeply understand the systems in place that provide Americans with food. Securing the technologies that make those supply chains work is an enormous job.

With an undergraduate degree in Journalism from Howard University, Washington’s technical skills initially came through on-the job learning. She took up computer programming and coding early in her career with the government and believes that learning to code within a relatable professional framework accelerated her understanding of the languages and methods of programming far faster than traditional classwork would have. She was able to work problems out in real-time by collaborating with her coworkers, and immediately see the results of their efforts on the systems they were actively using.

Washington’s first Master of Science in Administration, helped her get into management roles after a couple of years of programming. But she was still working her way through the expansive middle level of the agency, when she decided that she wanted to pursue a master’s degree in information technology. In 1997, Washington received her second Master of Science from Syracuse, Information Resources Management, now referred to as the iSchool.

In 2001 she was offered a position in cybersecurity with another agency. With her experience learning about this technical industry in her prior position, and her iSchool education, Washington was ready to take on a new role and a new set of challenges. Since then, she has worked on the management and privacy side of the agency.

Washington speaks seriously about the need to stay up-to-date on anything new in her industry. As one of the most dynamic spaces in technology, security professionals are locked in a constant arms race with the bad actors. The rapid pace of advancing technology dictates the speed at which security professionals need to learn new tools and methodologies. There is an ever growing threat from global hacking organizations, and Washington remains vigilant with regards to the privacy section.  “These hackers are up 24 hours a day trying to break into a federal system,” she says. Her deep understanding of information technology, her iSchool education and a variety of on-the-job trainings have prepared her for managing professionals in one of the most vital sections of the information security and privacy landscape.

The vast amount of data being stored by organizations means that they are a constant target for adversaries. The sheer number of access points by way of individual email accounts, software updates, ancillary organizations and myriad other potential vulnerabilities for bad-actors to exploit means that the security of the systems and practices at the agency must be kept on permanent high-alert. In making the transition to the privacy side of the organization’s defenses, Washington is constantly dealing with enforcing privacy policies and maintaining control of privacy for applicable systems. Her background in information and data science helps her speak the necessary languages while addressing these highly technical issues.

After completing her second master’s degree, and as self-described “life-long-learner”, she decided to attend Nova Southeastern University for its Doctoral Program in Information Systems. Taking every opportunity available to gain new knowledge, perspective, or experience, Washington tried her hand at teaching. She has been teaching information technology online for the University of Maryland Global Campus since 2000. This school specifically caters to adult learners who are visiting or re-visiting higher education after a prolonged hiatus. She finds a great sense of purpose while connecting with this population of students, and is always amazed at how much she learns from them during their time together.

Washington is also passionate about getting kids involved in STEM. She says, “Having that mentorship, or coaching, really needs to start in elementary school. The sooner that we can get every student involved in information technology, the better. The next conflict, in her opinion, it’s not going to be by tanks and guns, it may possibly be breaking into our water system, or traffic system, or a satellite, or a drone. Cybersecurity is going to be so important.”