Hailey Temple ’15 prides herself on being a creative problem solver who thrives on helping others reinvent the wheel when it comes to collaboration. In a world currently transitioning to work from home amidst a global pandemic, she’s had the opportunity to put her skills to the test as a Services Lead with MURAL. Hailey describes MURAL as “a digital collaboration tool similar to what you would use a whiteboard for. It’s about mapping ideas, sketching concepts, and sharing feedback.” At a time when virtual collaboration has become the primary means of working together, MURAL has become a key tool for teamwork. 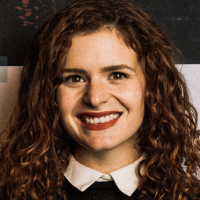 Hailey Temple originally became acquainted with MURAL at a former job where she noticed that attempts to convey ideas through visuals often fell short. She began using MURAL to address these issues, and was inspired by their emphasis on creating shared understanding. “At MURAL, we say video conferencing is ‘I see you’, whereas MURAL helps you see what you mean,” she says.

“This has been an especially crucial aspect of MURAL’s mission, especially as our global workforce has been transformed by COVID-19. Overall, I think business has grown by a factor of fifteen times over the last couple months”, Hailey remarks. “Demand for our tool has gone up exponentially. It feels like we’re climbing a huge cliff to successfully scale performance and reduce the risk of people not having access to this tool.”

In order to combat the enormous increase in customers, Hailey prioritizes tasks in order to maximize efficiency, and takes steps to ensure everyone is on the same page in terms of defining success. She says, “We need to get things done quickly but not skimp on quality. Now that we’re a distributed, global team, it’s about getting aligned on what success looks like.”

That success is in part fueled by a culture of transparency and openness across the workplace. In current times where it is especially difficult to feel connected through a screen, Hailey has experienced firsthand the importance of purposefully making time to get to know your co-workers. “We try to take moments to be aware of how we’re feeling. We’ve created a culture of openness with each other, what needs to happen next, and where we might need help.” She notes that Slack is a crucial tool within their digital ecosystem that helps them feel a grounded sense of togetherness. MURAL’s Head of Culture and Collaboration begins each workday with a fun question, such as “What three famous people would you want at your fantasy dinner party?” Hailey says, “We have some fun channels. We have a ‘Yelling’ channel where everyone goes to type in all caps and digitally vent at the top of your lungs.”

Even though this growth period has created challenges, Hailey doesn’t view that pressure as an inherent negative.“We feel stress both individually and as a team, but stress isn’t necessarily a bad thing,” she says. “It’s when you don’t have trust, and you don’t feel as though you can get through it with the support of the people around you that problems can arise. Instead, she focuses on building trust through communication, tactical engagement, and empathy.

She also stresses the importance of being intentional about the purpose of meetings. “I try to make clear to people why they’re in the meeting and what they’re there to contribute. If they don’t know why they should be there, they won’t feel engaged or that it’s even worth their time.” Because of her work with MURAL, she is also especially in tune with the obstacles others may be facing while trying to remain engaged during meetings throughout the pandemic. “People are working from home. They might have kids, chores, or loved ones who are sick. There are so many things competing for people’s attention. I do what I can to make sure I can keep them engaged.”

It’s been an especially fulfilling experience for Hailey to see MURAL’s full potential shine through the difficulties of navigating the pandemic. She notes that the current global health situation has pushed companies and users to get creative, saying, “I’ve seen it used wonderfully for people helping to solve challenges around COVID-19, like brainstorming exercises and workarounds for social distancing challenges.” For MURAL moving forward, it’s about continuing to adapt their technology to manage their services at the scale people need right now. She’s focusing on “being as agile as possible”, and continuing to play her part in helping companies achieve widespread digital collaboration with MURAL.