Streaming platforms like Spotify are known for their ability to provide users with personalized music recommendations based on their listening history, but what if there was a way to provide a user with a recommendation based on how he or she is feeling at that moment?

Graduate student and NEXIS lab researcher Reid Yaworski had a lot of free time to “tinker with this idea” after he graduated last spring during the height of the COVID-19 pandemic. He was not working before starting his graduate studies in Library and Information Science at the iSchool, so he decided to focus on independent learning about EEG sensors.

After a while, this tinkering turned into a tangible music suggestion model called MYND. The technology uses an EEG sensor to identify how active each part of the individual’s brain is, which can be used to determine an individual’s mood at a given time. This data is then paired with song data in the user’s Spotify library to make a song recommendation based on how the user is feeling at that moment.

“Right now recommendation systems are based on past usage and behaviors, which contributes to an echo chamber effect,” said Yaworski. “If you employ EEG data and ratings, you can give more power to the user based on how they are feeling at that moment and empower them to broaden in their music taste.”

The development of this technology is exciting for Yaworski because it has multiple applications in the real world. On the commercial side, it presents an opportunity for platforms like Spotify to make its existing recommendation model more attractive to customers, but it can also be used to help people struggling with mental health issues as well. According to Yaworski, many studies have shown that music can help people when they feel depressed, and he hopes that in the future this technology can be used medicinally to help treat depression with song recommendations. 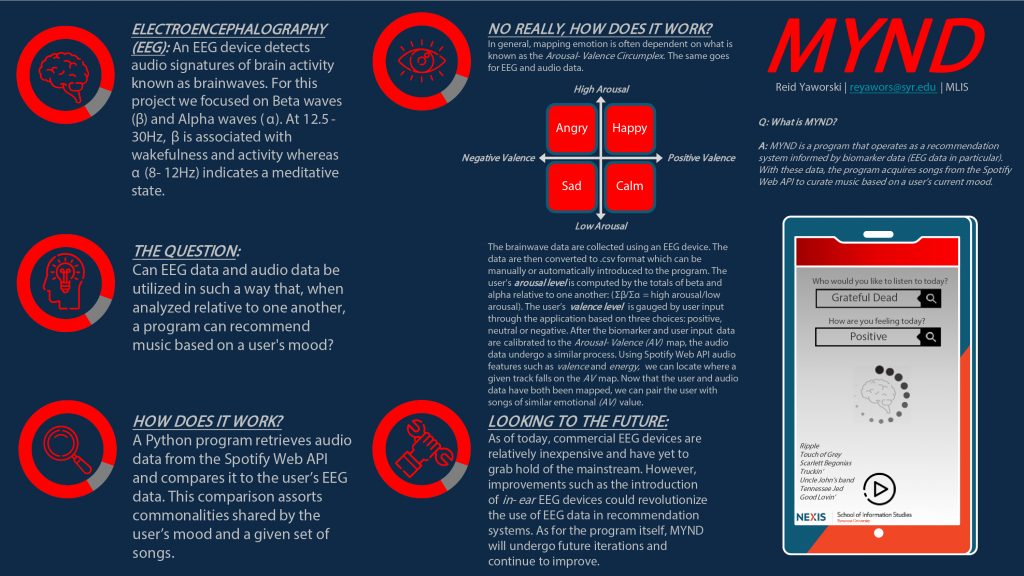 MYND by Reid Elliot Yaworski is licensed under CC BY-NC 4.0.

Yaworski was able to make this project a reality by working in the NEXIS lab, which is a student-run organization that provides iSchool students with the opportunity to research technology projects with real-world business applications. As a student who studied music during his undergraduate years, Yaworski was excited that NEXIS gave him the opportunity to combine his passion for music with technology to create a tangible product.

“The NEXIS community was integral to the entire process of building MYND,” said Yaworski. “Several members of the team offered me valuable information that I was not aware of before.”

Yaworski’s work came to a culmination when he presented his project to a team of fellow NEXIS student researchers and professors at NEXIS’s project pitchout presentations in November. This gave Yaworski the opportunity to share with the community what he learned and answer questions about how his program functions. While this presentation marked the end of Yaworski’s project at NEXIS, he is looking forward to the future when this technology could be used for commercial purposes.

“Right now people would have to go out of their way to find an EEG sensor in order to use this technology, but if we can build an in-ear device with an EEG sensor on earbuds this program will become accessible,” said Yaworski.

MYND was just one of many projects developed in the NEXIS lab this semester, and Yaworski’s story shows that innovation is possible with the support of a community and a little bit of time to tinker.