Libraries Lead in the New Normal: A Podcast Presented by iSchool Scholars

Three iSchool alumni launched a podcast to discuss libraries, information, and, what they describe as, ‘awesome library thingys’. This raised some obvious questions. Why would anyone other than library professionals want to listen to a podcast about libraries? How can a serial conversation between librarians about libraries remain compelling after even a few episodes? Do they speak in hushed voices the whole time?

Mike Eisenberg, David Lankes, and Beth Patin, decided to put their curiosities, philosophies, and archival experience and knowledge, through a real-time peer-review process twice a month to bring you the Libraries Lead in the New Normal podcast. The three verbose scholars start each conversation with quick introductions and pleasantries, then launch into whatever subject the episode is exploring. They wrap every hour-long conversation with a segment they call “Awesome Library Thingy”, where they discuss something awesome in the library field that they have recently come across.

To their podcast they bring energy, timely and topical issues, vast amounts of knowledge and experience, and a rhythm that keeps the conversation engaging. Though they are all located in different parts of the country, they meet virtually to record the episodes and send the audio to a company called ACE Chicago Events, for final production. For them, this is a labor of love. Love for learning, teaching, libraries, and rescuing truth from the deluge of confounding (dis)information floods.

In most of the academic circles orbiting information studies and library science, Mike Eisenberg needs no introduction. He is a former doctoral student and professor at Syracuse University, then the Founder, Dean Emeritus, and Professor Emeritus, of the University of Washington iSchool. His contribution to shaping the modern discipline of information studies is immeasurable.

Eisenberg has taught and mentored both Lankes and Patin. He is the self-proclaimed “old man” of the team. His wealth of knowledge helped guide both of them through their respective educational paths, and he has remained a trusted advisor throughout their professional endeavors. Eisenberg and Lankes decided to kick off the first season of Libraries Lead in the New Normal and effectively found the voice of the show by trial and error. It wasn’t until an episode featuring Patin as a guest that they both realized that she would be an incredible third co-host to round out the panel. Patin delivers on all things that make for an interesting podcast. She was a perfect fit for the show.

As a true librarian would, Eisenberg points out that they have a website dedicated to citing all of the sources they reference on the podcast. They are meticulous about this detail, and want to spread the intellectual credit wherever it is due. This also makes it incredibly easy for listeners to perform any follow up research they are inclined to pursue.

Eisenberg’s voice begins to get excited as he explains how underlying everything, they are all great teachers in different stages of their careers, and he sees the goal of this project as another wonderful opportunity to teach. He says, “Each of us have gotten teaching awards, we’re all good teachers. In fact, I think that is what we are trying to do in the podcast. Talk to each other and to teach. To raise interesting topics to give people information and understanding, have them be able to learn and then delve deeper into it.”

Getting his doctorate in information studies from Syracuse’s iSchool in 1999, David Lankes stayed on to climb the ranks of professor for several years before moving on to other schools. A few stops in between, and Lankes is now the Virginia and Charles Bowden Professor of Librarianship at the University of Texas at Austin School of Information Studies. It may have first been Eisenberg’s idea to try a podcast, but it was Lankes’ experience with podcasting and recording that really got them off the ground.

As busy as he is, Lankes is passionate about promoting and supporting libraries and library workers. His work with this podcast is born mostly out of an endless curiosity and a desire to generate conversations around information and the institutions of libraries. He first cut his teeth in podcasting when he started a program, with some colleagues from the University of South Carolina, designed around providing professional development for all of the library professionals who were suddenly away from work due to the pandemic. When Eisenberg approached him about the idea for a podcast about all-things-library, Lankes was immediately on board.

Both men agree that the addition of Patin to the regular conversation has improved the podcast exponentially. Lankes has known Beth for a number of years, although they never overlapped at SU. Dave couldn’t be happier to have her perspective and energy to help balance out the “two old white guys”.

Lankes sees the mission of this podcast as aligning closely with his mission at University of Texas. He says, “It is to connect information science and the information schools with the field of librarianship. Getting guests and highlighting topics and making that link to the general population. Our goal is to expand the audience so that we can really talk about some of the core issues that librarians have talked about for a long time.” 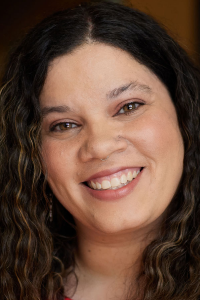 Beth Patin earned her doctorate in information studies from the University of Washington Information School, and was a student and teaching assistant of Eisenberg’s during that program. As she neared graduation, Dean Emeritus Liz Liddy quickly and successfully recruited her for the Syracuse iSchool  as an Assistant Professor. As the young-gun of the podcast team, she brings the perspectives from a younger generation, a librarian of color, and current trends and concerns to the table. And despite similar and even overlapping educational backgrounds, Patin appreciates that they all still come at topics with very different approaches.

Patin’s doctoral dissertation was about the role of public libraries supporting community resilience throughout disasters. This topic was inspired in large part by her experiences rebuilding libraries in New Orleans after Hurricane Katrina. Her first invite to the podcast was for a discussion about this topic and her work studying it. She didn’t know that she would be invited back for every episode after that, but she jumped at the opportunity. She was excited about the chemistry that she shared with the other two co-hosts, and she knew that a chance to talk with other giants in the field of librarianship was too good to pass up.

“We’ve really been focusing on what our new lives are going to be after COVID. As we go to establish a ‘new normal’, what will that mean for libraries? What will that mean for information science? And how can we as information professionals think about this stuff to support our communities?” says Patin as she describes her motivation behind joining the podcast. She admits they were originally just talking to other people in the library profession, but they’ve realized that they can broaden the audience by broadening the topics into how information touches everyday lives.

When Patin is not in Syracuse she is in Huntsville, working on a grant from the Alabama Humanities Alliance to capture, preserve, and amplify the untold stories of the Civil Rights Movement in Huntsville, Alabama. She also serves on several boards, including a recent appointment to the NYS Board of Regents. Patin will be finishing this semester of teaching and then using a sabbatical starting in the fall, to complete a book about epistemicide (the killing of knowledge systems).

The podcast can be found wherever you get your podcasts. Episode 15, which was recommended by Patin as a good example of what their podcast is generally trying to achieve with each episode, is a conversation about social media. They discuss their own relationships with different social media platforms, as well as the latest information and studies about those platforms’ roles and influence in modern life. Like all of the episodes, this one closes with a round table segment of Awesome Library Thingy. Each member of the panel describes something cool that they have recently learned about in the library and information space. These serve as teasers for future topics, or jumping off points for the audience to do some further research.