Have you ever been around campus during orientation? 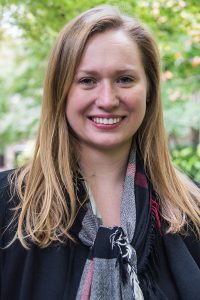 For over four years, those large-scale events were part of Katherine McCormick’s job — first as an Admissions Counselor and later as the Assistant Director of Admissions for Syracuse University.

It was during that time that Katherine decided to become one of the first people to enroll in the iSchool’s newly created MS in Applied Data Science program.

“I believe that the future is going to need way more data scientists than we have now,” she said.

But the path to becoming one wasn’t necessarily easy. While studying English Literature as an undergrad at Haverford, Katherine actually withdrew from her intro to computer science course.

That made the prospect of taking technical classes at the iSchool intimidating, to say the least. But thanks to the expertise of iSchool faculty, a supportive peer network, and her own determination, she accomplished what she previously thought was impossible.

Now working as a Vice President for BNY Mellon, Katherine is leading her team to build a data visualization and reporting tool for their clients. That way, they can digest and engage with critical information more easily and efficiently.

“We hear a lot these days about AI, and organizations are collecting a lot of data, but how do we actually make it useful?” Katherine asks.

The current client reporting system at BNY Mellon involves piecing together different spreadsheets, PDFs, charts, graphics, and more, then presenting all of it to the client in parts. With the new “digital client governance” tool, clients will simply be able to login to a dashboard and see everything in one place.

It’s an aggressive project that requires a lot of planning and technical problem solving, though that’s anything but a deterrent for Katherine.

“What I’ve learned at the iSchool has empowered me to tackle problems head-on,” she said, “Just because something hasn’t been done before doesn’t mean it can’t be done.”

She credits the iSchool for making her transition from higher ed into the for-profit world smoother. The degree and technical skill, she says, is a valuable asset when it comes to moving forward in her career.

Best of all, Katherine was able to pick up new skills and complete her coursework entirely online — while also attending football games at the Carrier Dome, enjoying local culture, and taking advantage of the natural attractions surrounding the area. She even got married in Hendricks Chapel.

“Syracuse has done something incredible with their virtual programs,” she said, “I’m grateful to have participated in a virtual educational environment at a university to which I had other connections.”

She encourages everyone to understand the experience of online students in order to think about the identity of current students, alumni, and the University itself, especially in the midst of COVID-19. What’s at the core of what everyone receives and leaves with?

Katherine herself is taking this time to reflect on the vision she has for her own life. She and her husband just bought a house in Manlius, where they hope to host parties and gatherings again soon. They have no plans of leaving the area anytime soon.

“At SU, I grew unexpected roots,” she said.

“They’ve changed my life for the better.”