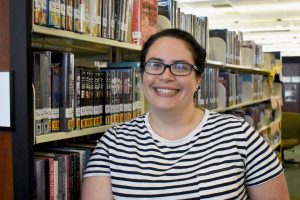 Libraries are about books, music, movies, computer access, and digital offerings. But first and foremost, libraries are about people and enriching the lives of people. That’s how Jennifer (Scott) Brown G’10 approaches her job with the Suffolk Public Library System in southwest Virginia. And she’s gaining recognition for the work she is doing.

Brown, was named in 2019 as the Virginia Library Association’s Donna G. Cote Librarian of the Year Award. The award recognizes “an exemplary achievement of a working Virginia librarian who demonstrates the value of libraries, enhances the image of librarians and/or libraries, promotes an accessible and positive climate in the library, advances community relations, or initiates a new library service or program,’’ the association says.

Brown was selected for her work on “SPL Mess Hall,” a lunch program the library introduced in 2018 as part of the U.S. Department of Agriculture’s No Kid Hungry initiative, a collaboration with local churches and community organizations.

The need for the library lunch program became apparent when Brown and other library staff members saw how many young people were coming to the library in the morning and spending long periods of time there – during which their stomachs were growling. Some kids asked staff members if food was available and if they had money for them to buy food, Brown recounts.

“We began to explore opportunities to feed the kids in the library during the summer, so they would at least have one meal while they were with us. We hit a lot of roadblocks at first, going through the logistics of getting the program up and running, but we were able to work around them,’’ Brown says.

The program helped feed more than 1,200 economically and socially disadvantaged children in 2018, and it was held again in 2019. Under Brown’s leadership, the library also partnered with city and community organizations to offer a Back to School Resource Fair for kids and parents.

The library also  offers outreach services such as Library2Go, a mobile unit with books and other materials for all ages and reading levels, plus technology like iPads and gaming gear; and Pop-Up Libraries, where visitors can sign up for library cards, check out books and other materials, take part in demonstrations, undertake interactive programming, and access the internet.

Brown, who says she is a research, data, and programming nerd, initially planned to become an academic librarian when she left Syracuse University, she says. She worked as a children’s programmer and as a youth and family services librarian at the Virginia Beach Public Library before joining the Suffolk Public Library. She was named youth and family services manager there in 2016.

The most rewarding part of her job is developing programs for people and taking the library outside its traditional walls, Brown says.

“In Syracuse, I fell in love with the field and the impact that we, as librarians, can have on an entire community,’’ she says. “You can’t wait for people to come to you. You have to go to them.’’