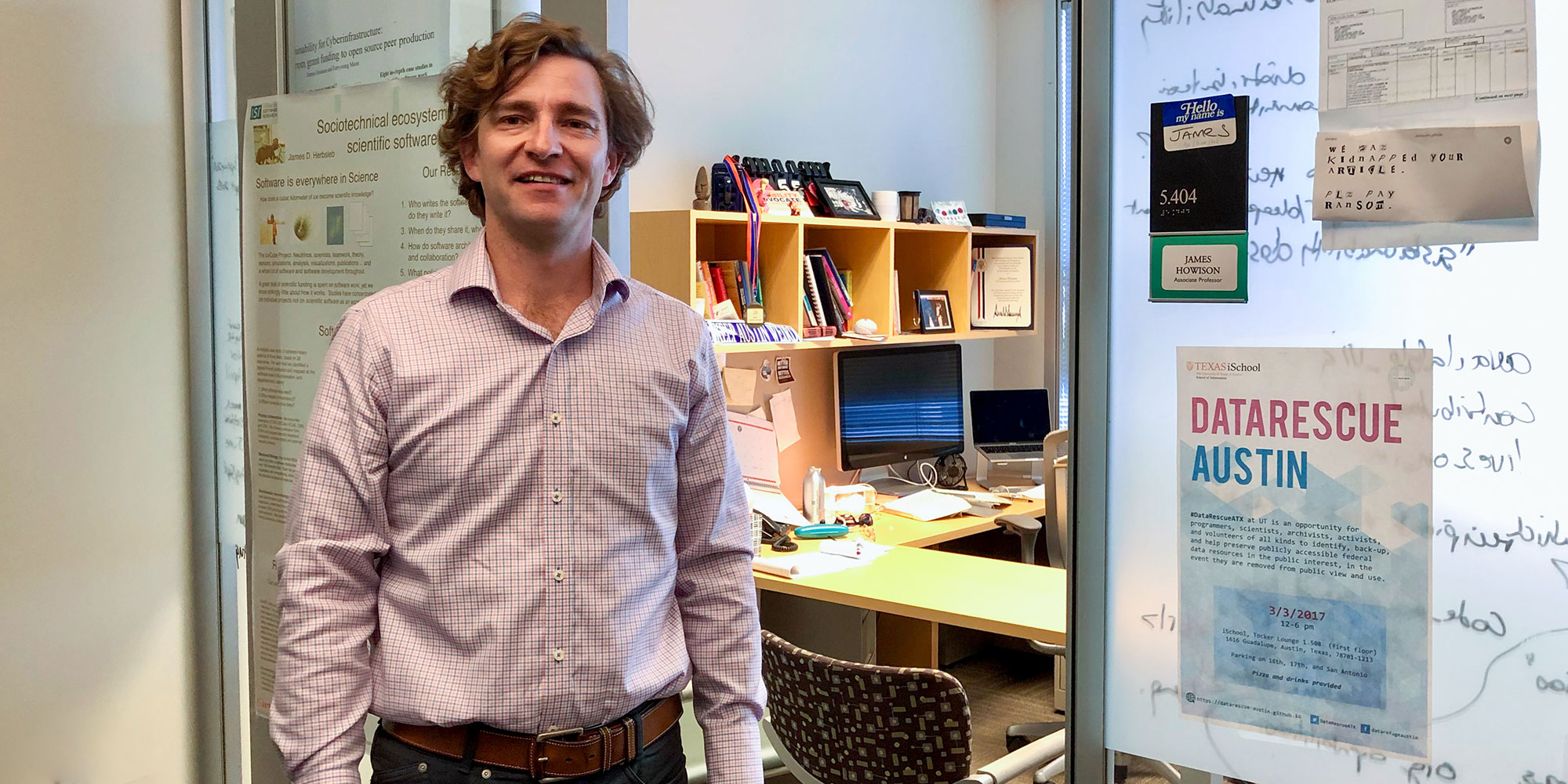 In early 2019, James Howison, a 2009 graduate of the School of Information Studies doctoral program, received an email from the Federal Bureau of Investigation asking him for personal information and instructing him not to tell anyone about the message.

He was certain it was a phishing scam. “No way am I filling this out!” he said to himself then.

After a call to the White House switch board, however, Howison realized the email was a legitimate one, and that it was informing him of his selection as a recipient of the 2019 Presidential Early Career Award in Science and Engineering.

The PECASE award is the highest honor bestowed by the U.S. government to outstanding scientists and engineers who are beginning their independent research careers and who show exceptional promise for leadership in the field. Its awarding is coordinated by the White House Office of Science and Technology Policy with participating departments and agencies. Winners are selected from National Science Foundation CAREER awardees, among others.

Selection for the PECASE is a “humbling honor” for Howison, who now is an associate professor at the Information School at the University of Texas-Austin, he says. The honor is significant because it represents recognition of the value of his research area. It also offers confirmation that sociotechnical research is of interest to a wide enough group of people that, as it went up the levels of the National Science Foundation, the effort of his many years of work was recognized, he explains.

“It’s validation that the topics of my research are seen to be relevant to the sociotechnical approach of thinking about people and incentives and what really matters to people who think about the scientific enterprise and science as a whole. I hope, like any academic, that any kudos I get will also benefit my students and my field.”

As the magnitude of receiving the prestigious award set in, Howison sent personal notes of thanks to many of those who helped him along the way, including several of his iSchool professors. Among them are Kevin Crowston, associate dean for research and a distinguished professor of information science, who served as his advisor; Carsten Østerlund, professor; and Robert Heckman, former senior associate dean.

Howison recalls now how those mentors, and the iSchool environment, helped him. “The iSchool at Syracuse teaches you to talk about your work to people, particularly in other disciplines. The school lives interdisciplinary work every day, which was critical for me to make the case for my work to others.”

Crowston said that Howison’s selection for the award is significant because “the PECASE is given only to a select few from all areas of science and engineering, so it is particularly noteworthy when an information school graduate is so honored.” Doctoral Program Director Steven Sawyer added, “It’s worth noting that social scientists winning PECASE recognition is incredibly rare, making this amazing feat even more newsworthy.”

Born in Scotland, Howison grew up in Australia, earning his undergraduate degree in economics (social sciences) from the University of Sydney in 1998. Prior to returning to graduate school, he worked in information systems implementation with KPMG management consultants, on distance education with Burmese refugees in Thailand, and as a consultant with Control Risks Group, an international crisis management consultancy.

He pursued a master’s program in software engineering at the University of New South Wales before transferring to the School of Information Studies’ doctoral program. During his time at Syracuse University, he worked with Charles River Venture Capital, providing research on opportunities in the open source software space.

After receiving his doctorate (and meeting his wife, who is also a Syracuse University graduate), Howison became a post-doctoral associate at the Institute for Software Research at the Carnegie Mellon School of Computer Science. He then went on to a tenure-track position at the University of Texas-Austin Information School, where he has been since 2011.