RSM is the sixth largest accounting firm in the world in terms of annual revenue. This multinational network of professionals offers expert services for audit, tax, and consulting needs. And over the past five years, RSM has hired nine iSchool graduates along with several other students from other schools of Syracuse University. Three of the iSchool alumni have shared their stories.

Maya Alston found out about the iSchool through the IT Girls program. This program brings several high school girls to campus to showcase the curriculum and potential career paths available by way of an iSchool education. In Alston’s case, she was interested in the idea of a future in information and technology, and the iSchool became her priority college application.

Once enrolled, she declared her major in Information Management and Technology, and minored in Information Security Management. Alston was most interested in the security aspect of her education and career trajectory, but wanted to build her business background as well. After an internship with the Federal Government, she decided that she wanted to pursue a career in the private sector.

Alston’s friend and iSchool graduate Emily Simens suggested the possibility of working for RSM. “One of the things that got me really excited about RSM is that it was a really diverse team, and that is something that you don’t typically see in security,” says Alston. She now works as a Security and Privacy Risk Consultant. In this role she is working with federal contractors on maintaining security requirements and staying in compliance.

Alston values the fact that her job is mostly client-facing. She is frequently interacting directly with clients in order to fulfill their security and privacy needs, but the parts of her job that she enjoys the most are the internal functions she performs for building systems and practices that will have long-term benefit to the organization. The team she is working with now is relatively new and they are still building their own systems and processes.

When working in such a dynamic field, it is important to have an understanding of the basics, but in order to keep up with fast moving advances, a professional must be constantly seeking new knowledge by asking the right questions and doing the necessary research. Noting that technology is always changing, Alston credits the iSchool with more than just the technical education that it provided to her; “it taught her how to ask the right questions.”

Rhea Patel grew up in New Jersey as the daughter of two IT professionals. Her proximity to the industry was key to her early interest in technology. In high school she had the opportunity to take a condensed coding class offered through the iSchool, further fueling her passion for an educational track in IT. This immersive experience convinced her that full-time enrollment at the iSchool would be her best course of action after graduating high school.

As an Information Management and Technology major, Patel surprised herself with her immediate aptitude for the subject matter. She had expected a more difficult transition into the program, but found that the coursework, and the professors, were more accessible and not as daunting as she had anticipated. Also there to help ease the transition was Patel’s friend and sorority sister, Emily Simens. With Simens’ encouragement, Patel’s passion for the security industry was ignited, and having been through the program a year earlier than Patel, Simens gave a lot of advice on ways to get involved in clubs and programs that would complement her educational goals and bolster her marketability. After a couple of semesters of general coursework, she decided to concentrate her efforts in Information Security Management.

Patel also credits the iSchool’s Career Services Center for helping her find her way through college and into the workforce. The workshops and guidance accessible through the center provided her with invaluable resources to help shape her future. Working with Career Services was so rewarding that Patel now finds herself using a lot of the same strategies and principles she learned from that experience in her role as a recruiter for RSM at STEM events for prospective employees.

Following a suggestion from her friend touting the culture of the organization, Patel pursued a position at RSM. After an intensive training process, and exposure to many parts of the firm, Patel started in Enterprise Content Management. She was pleased to find a lot of support and mentorship among the members of her professional team. She felt lucky to have landed a role in such a positive organizational culture. “What I really love about RSM the most is the people. It’s been almost eight months since I started and I have grown so much, and I’ve had so much positive reinforcement. When you’re doing a good job, they tell you, and that is really motivating,” she says. 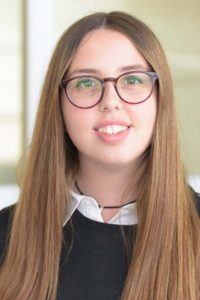 Emily Simens comes from a very “Orange” family. Several of her kin attended Syracuse University and it was on her radar from an early age. While in high school, she also attended the IT Girls program, and was hooked on the iSchool.

Always interested in technology, but without a driving force, Simens found her trajectory through the Information Security Club at the iSchool. This program opened new passions and career paths that she had not previously considered. She was able to participate in labs and “hack-a-thons” that she wouldn’t have been exposed to otherwise. From one of these hack-a-thon events, the Collegiate Cyber Defense Competition (CCDC), she met some employees of RSM. As a natural networker, Simens stayed in touch with them, and now performs as a full-time member of their team. Working mostly remotely in New York City, Simens is part of the Security and Privacy Risk Consulting team.

Simens stays involved with the iSchool by attending recruiting trips to career fairs on campus. She feels strongly about the value of an iSchool education and is happy to show those students something to strive for professionally. She felt especially useful in this role while counseling students through the pandemic and assuring them that there was still a professional future to be had.

In terms of serving as council, Simens also leads the NYC Interfaith Group within RSM. This is a continuation of a passion that was important to her in college and she is able to continue pursuing this interest through the company. She helps coordinate the blending of faiths and cultures into the work environments of RSM offices around North America.

In their positions as Associates in Security and Privacy Risk Consulting, Simens and Alston compare the written policies of an organization to their actual practices, and the different laws and frameworks that they are supposed to be practicing within. Simens mostly focuses on making sure that companies are storing credit card information securely and in compliance with regulations. She enjoys getting to know the people she works with in this client-facing role and emphasizes that it is the relationships that make the process so rewarding.

Simens believes that the iSchool did a great job preparing her for her career. She says, “I did a lot of stuff at the iSchool. I participated in the immersion trip and I was a peer advisor. The Information Security Club really gave me the skills for my job. I had been involved with that from my freshman to my senior year. My senior year I took a class about security policy. Maya and I were both in the class, and it covered exactly what we do in our jobs.”

RSM has a culture based on what it calls the 5 C’s. The organization touts that its people are Caring, Curious, Collaborative, and Courageous Critical thinkers; the characteristics that make a “first-choice advisor” in their industry. All three iSchoolers who landed jobs at RSM emphasize that the company truly encourages and embodies these values, and that their time at the iSchool helped to pave the way for a seamless assimilation into these professional principles.