iSchool Graduate Lands a Job With One of The Big Four 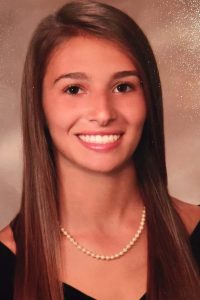 Erica Beaudry knew early on that she wanted to work in the accounting field, but she didn’t know how she was going to find her way into it professionally. She had taken some accounting classes offered by her high school in Massachusetts, and planned to declare an accounting major in college. With her college dream being fulfilled at Syracuse University, she set her sights on the Whitman School. Her interest in information studies came a little later.

By the second semester of her freshman year she had met several peers that were students in the School of Information Studies. Beaudry had been considering taking on a second major, and the idea of the iSchool was simmering in her curiosity. By the second semester of her sophomore year, she had taken the pre-reqs, and switched her major to the iSchool program for information management and technology, with a concentration in cybersecurity, and a minor in business from Whitman.

Beaudry learned through internship experience that she wanted to work for a large company. She was looking for the excitement of living in a major city, and the reach and opportunity provided by a major organization. As an IT Intern for Radius Health, she got experience in many different aspects of their various and ongoing IT projects.

Another interesting internship opportunity for Beaudry was at SIDEARM SPORTS. In her role there she was a Streaming Support Specialist, and had to perform customer service duties that kept the work environment fast-paced and solution-oriented. This internship required that she draw from her toolbox of soft skills, and she remembers spending lots of time on the phone with customers that needed an unusual amount of assistance.

Beaudry mentions how the presentation class that she took at the iSchool really opened new doors for her. Public speaking had long been a source of anxiety for her, and the process of attending this class stands out as a transformational experience for Beaudry personally, and professionally. She is constantly involved with direct client interactions, and feels far more confident and self-possessed than she had when she arrived at college.

Beaudry participated in the EuroTech program after her sophomore year. They visited countries in Europe, saw the sights, and met with major companies, getting to experience those workplaces and cultures while touring the facilities. These tours also came with talks about business practices and technologies that were being employed by some of the largest corporations in the world.

After all these experiences and internships, and as she was finishing up her impressive course load, she landed a job with KPMG. This is one of the Big Four accounting firms in the world, and Beaudry has found herself in the professional setting that she had been looking for. Currently, she is living in NYC and working as an Advisory Associate in the Consulting Risk Assurance Practice of the top tier firm. Her role is specifically tied to internal audit work and technology risk work. Her expertise with technology, combined with the soft skills that she developed through the iSchool, helped her to land the job, and continue to help her carry out her professional duties everyday.

Beaudry played club lacrosse and joined a couple of different business/technology clubs on campus. Her involvement in extracurricular activities not only helped keep her well rounded through the rigors of her formidable course load, but it also exposed her to a lot of networking that she might otherwise have missed out on. Lacrosse kept her physically fit and fed her competitive spirit, and the business clubs kept her networking skills honed. As a participant in KPMG recruiting events now, she recognizes the benefits of having a rich extracurricular life for graduates entering the workforce.

She enjoys the opportunities to go back to the iSchool and connect with students. At these recruitment events, she gets to hear stories, and share her own about her journey through Syracuse University and into KPMG. She even had two iSchool alum on her previous team at the company, and is now on a team with someone who she took classes with during her college run. She notes that there is a strong iSchool presence at KPMG.

She says, “Not only did the iSchool prepare me for my job and life after the iSchool, but also the support of Career Services, specifically, was very helpful in facilitating any sort of involvement for getting me ready for my future. Whether it was to help with my resume, getting ready for an interview, or actually interacting with companies like KPMG. In addition to just the classes and coursework in the iSchool, I think that Career Services does a really good job there.”