How This iSchool Alum Uses Digital Skills For Social Impact

If there’s anything you should know about Liz Ngonzi (’92), it’s that she’s bold, she’s courageous, and she’s devoted her life to strengthening the social impact ecosystem around the globe.

But her path to a career as a social entrepreneur, educator, and international speaker didn’t take the direction you might expect.

It’s true that Liz has always been a bit of an entrepreneur. By the time she was 14 years old, she had created a babysitting service and scaled to at least six different client families. It was a “baby empire,” as she describes it. 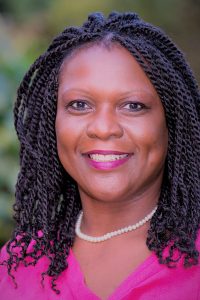 When she came to Syracuse University in 1988, however, she didn’t major in business. Instead, she started out in visual and performing arts. About mid-way through her freshman year, a mentor introduced her to the iSchool. She was hooked and decided to transfer in the following semester.

“I barely knew how to type!” Liz said, “[But] I loved the fact that you could solve problems with technology and information.”

In 1992, the year Liz graduated, the country was in the midst of a recession. While many of her peers took jobs waiting tables just to get by, she graduated with five job offers in hand. She started receiving some of them as early as the fall of her senior year and credits the real-world skills learned in her major with making her stand out in a struggling economy.

Liz ended up taking a job in marketing with Digital Equipment Corporation, the legendary computer company founded by Ken Olson and Harlan Anderson. They had recruited her as one of 16 people nationwide for their exclusive Marketing Development Program, a rotational program which exposed her to areas such as aerospace marketing, corporate communications and sales. Following that, she worked in B2B sales for MICROS Systems Inc., the leading provider of hospitality Point of Sales Systems in the world, where she learned about the hospitality industry through her clients, ranging from independent restaurants to amusement parks.

That experience eventually led to her completing an MMH degree (hospitality-focused MBA) at Cornell and moving on to a job in consulting with Arthur Andersen. The work was demanding, and she was determined to rise to the top of the corporate ladder. But after struggling with a lack of work-life balance, Liz began to seriously re-evaluate what she wanted out of her life and career.

While Liz was growing up, her mother, a gender rights activist, worked for the United Nations Development Programme, and her father – the late Dr. John Ruganda, Uganda’s most famous playwright – was living in exile because he had written plays that spoke out against the Ugandan government. She was from a family that valued helping others and making the world a better place — and she wanted to make that the focal point of her career.

That’s what inspired Liz to establish a business that evolved into a consulting firm connecting nonprofits to corporations, philanthropic funders, and the media, in order to help these nonprofit clients to raise funds and raise awareness of their impact. The new direction turned out to be a natural fit given both her family history, her academic expertise and her passion.  The way the firm differentiated itself from others was by providing its nonprofit clients with digital solutions such as custom event websites, email campaigns and online auctions, when most organizations still relied on print communications and such digital solutions were not yet widely employed.

“If I hadn’t come to the iSchool and had that background, I wouldn’t have been able to bring them that unique value,” Liz said.

Even in the wake of the Great Recession, when she lost 60% of her business more or less overnight and had to start over, Liz leaned on her entrepreneurial spirit and industry experience to figure out what nonprofits needed the most.

She began to offer trainings to help nonprofits utilize social media and other digital platforms to grow their online presence, then a rising trend. Over time, she expanded her consulting firm globally and helped nonprofits in Africa raise money online when funding from the European Union began to run dry.

From 2014-2018, Liz served as CEO of Afrika Tikkun USA — the North America arm of the South Africa-based child and youth development nonprofit Afrika Tikkun, which is one of only three organizations in the world to have been endorsed by Nelson Mandela. Through a partnership she developed with Facebook, her team organically grew the organization to become one of the most followed South African nonprofits on its platform. In addition, her team worked with McCann Worldgroup to develop an innovative “Future Leaders” campaign on LinkedIn, focusing on the stories of 12 teenage participants in the organization’s community center programs in disadvantaged communities and their bold career aspirations for the future. he campaign attracted the attention of AmerisourceBergen CEO, Steve Collis (after he watched the video of one of the teenagers stated that she wanted to become a leader in the pharmaceutical industry like him) who subsequently became its primary champion.

As an expert in digital storytelling, Liz has trained organizations on six continents and holds an adjunct faculty position at NYU. She also facilitates online courses through the Bank of America Institute for Women’s Entrepreneurship at Cornell.

“What I’m always doing is leveraging technology to help the people I’m working with,” she said.

But the common theme that ties together her work is more than just a background in tech. It’s about clarifying her purpose and learning how to evolve in order to meet the rapidly changing needs of organizations in the social sector.

So what does that look like for Liz in the future?

Through initiatives with Hunter College, the King Baudouin Foundation US, the Arcus Foundation, and others underway in  South Africa and Colombia, Liz and her global team at the newly-established International Social Impact Institute are designing courses, conferences, and content and delivering consulting services for nonprofit organizations and social enterprises that are often overlooked in under-resourced communities within the US and in developing countries.

The Institute is designed to address topics ranging from identifying untapped revenue sources to equity and inclusion to digital innovation in an effort to advance the social sector post-pandemic. All offerings are designed to be delivered online and therefore accessible to those irrespective of geography — not just those who have historically been well funded, informed and networked.

Liz says the emerging partnerships are perfect opportunities to reflect on the role each of us plays as agents of change. The nature of digital platforms and technologies as a global phenomenon means that students all over the world have the ability to generate far-reaching impact without ever having to leave their homes.

The Institute is a massive undertaking, but Liz looks to the life of Nelson Mandela himself as inspiration for seizing the opportunity and creating the change that is so desperately needed in the world today.

It explains why she keeps one of Mandela’s quotes in a frame on her office wall to inspire her to keep moving forward every day: “It always seems impossible until it’s done.”