Finding Her Way to FinTech

Some good advice from a favorite high school teacher in Oakland, New Jersey, led Lena Karakash to Syracuse University. The teacher had attended the university and after highly praising his own experience there, he encouraged her to look into it. Impressed by the programs, and the campus, she decided to go Orange.

She entered the university as a student of the Whitman School, and ended up declaring a major in finance. When exploring various careers, Karakash became interested in the booming field of financial technology (FinTech). However, she realized that she would have to look outside of the Whitman School for coursework in technology, and this brought her to the School of Information Studies as a dual major. In addition to valuing the conventional education of her finance program, she particularly enjoys the real-world applicability of the curriculum, and the collaborative style of teaching at the iSchool. 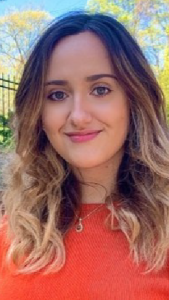 Not one to shy away from a challenge, Karakash was ready to take on her double major, and greeted the opportunity head-on. Being the type of person who will follow her curiosities as far as they go, she used this personality trait to its full advantage. An unwavering approach to pursuing her education is what initially brought her into the FinTech track; it also describes the energy with which she sought and secured a competitive internship with BlackRock.

Even though the pandemic forced the internship to a virtual setting, she still found that the people she worked with were welcoming, and maintained an air of mentorship. Many of the full-time staff she was working with were only a couple of years older than her; the culture felt relatable. She notes that despite having one of the largest asset management holdings in the world, BlackRock is composed of only a quarter of the size workforce compared to the other big competitors in the space. This is a testament to the talent and culture that the company attracts.

Another challenge that Karakash folded into her educational pursuit was the additional coursework of the honors program. She wanted to get the most out of her time at the university and sought the full complement of academic accolades upon graduating. For her honors thesis, Lena notes that she went an alternative route. She explains that the traditional honors thesis is usually an in-depth study of a topic that may not have been covered comprehensively in classwork, and the student wants a deeper understanding. In her case, she says, “I had enjoyed BlackRock so much, everything from the work, to the people, to the culture, that I wanted to highlight some things that they did very well. So my thesis, very simply put, is about my experience at BlackRock and how they’re able to integrate technology into their business workings.” She’s now writing the body of her thesis with the goal of getting it done to graduate this spring.

Upon entering the full-time workforce, she will be an analyst for BlackRock’s financial services platform called Aladdin. This is an investment program into which she expects to be deep to fully understand how the tools available can be matched with the clients’ needs. This role will require skills for direct client-facing interactions as well as a working knowledge of the technology.

Karakash has always had a fascination for languages. She appreciates the way that they connect people and allow for greater meaning and communication between cultures. She finds similar benefits in the applications of technologies. Working for Information Technology Services for the university, she is often engaging in conversations outside of the English language. Born in America to Russian parents, she did not become proficient in English until she needed to for grade school. Her first language is Russian. She has also been a dedicated student of Spanish, and with conversational fluency, she plans to fulfill a longtime goal of visiting Madrid between graduation and beginning her job with BlackRock.

For extracurricular activities, Karakash likes to branch out beyond the scope of Whitman and the iSchool; already full-time commitments. She volunteers and enjoys meeting new people and getting involved in the experience-rich environment of the campus. This same curiosity led her to a position on the Student Finance Board where she got to participate in student government activities. Pushing herself to try new clubs and activities has always rewarded her with unforeseen positive results. While reflecting on her time in the iSchool she says, “It is really easy to be comfortable where you are, but if you talk to that kid next to you in class, or ask that person about that networking experience, become friends with someone, or talk to your professor, it ends up building your network. It’s so valuable to have trusted friends and mentors wherever you are in life.”