When Ryan Ondocin completed his undergraduate in biology and chemistry at Penn State, he assumed he’d follow a career in medicine. But then Ondocin worked with PlantVillage, where he had his first experience in Python programming and applied data science, training object detection models for farmers to diagnose plant disease on their phones. This experience made him realize he wanted to pursue a master’s in a related field. 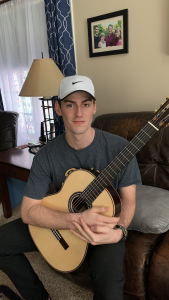 As a Syracuse native, Ondocin was familiar with Syracuse University but learned about the iSchool from a distant relative. He compared the iSchools Applied Data Science graduate program to similar programs across the US and ultimately felt the iSchool offered the most innovative and well-rounded curriculum.

“The program is pretty novel. It’s adapting to a lot of the changes that industry,” says Ondocin. “I didn’t feel like other schools were as up-to-date in this regard. I definitely was receptive to the sorts of changes they wanted to see in the industry and what companies wanted candidates to know.”

Ondocin enjoyed the material in his classes, but to get the most of his iSchool experience, Ondocin got involved with campus clubs and organizations, such as Syracuse University’s innovation hub Blackstone LaunchPad. Through Blackstone LaunchPad, Onocin and two peers created the social media startup Satellite. Ondocin’s role at Satellite was Technical Lead, where he focused on server capacity and creating proper documentation. Ondocin also worked with a group called WiTech, whose goal was to implement a mobile early warning platform that used sewage samples to predict Covid-19 cases in a particular area.

In his final semester at the iSchool, Ondocin accepted a full-time position as an Advisory Associate at KPMG’s Digital Lighthouse. Starting in July 2021, Ondocin will work as a data scientist and modeler in the Seattle office to help clients leverage data and analytics to accelerate their digital transformation. When reflecting on what made him a standout candidate, Ondocin credits his understanding of natural language processing.

“I think the reason I got the job is, two natural language processing Postdocs interviewed me, and some of my biggest projects just happened to be related to the field,” says Ondocin. “Since it’s an unstructured data form, you can obtain it by scraping the internet, leading to a higher volume of data. I think that’s why KPMG has a lot of people working in natural language processing because there are more opportunities to mine for patterns in things like tweets and company reviews. They simply need people who can make sense of the world through this.”

But it’s not just Ondocin’s academic knowledge that helps him stand out. Ondocin holds an equal balance of confidence and determination that’s helped him find success in applied data science. Ondocin jokingly admits he thought very highly of himself while attending Penn State. But, after connecting with his iSchool cohort, he found the diversity of his peers and the iSchool community to be one of the greatest highlights of his graduate education.

“All the friends I made, they seriously pushed me to the next level in terms of calc, stats, machine learning, and data structures. They went to some of the best technical universities in India and China,” says Ondocin. “I think beforehand, I thought of myself very highly. But a lot of my friends from the program, they’re just so brutally honest and disagreeable. If they don’t think you’re that good at something, they’ll tell you, and that’s what solid friends do. Those kinds of experiences are very humbling. If the program didn’t have that kind of diversity, I don’t think I would have pushed myself as hard nor ended up where I am today.”