You might not know it at first, but just a few years ago, Andrew Farah ’09, G’11 had no idea what he wanted to do with his life.

The co-founder and CEO recently closed a $51 million round of Series C funding for his startup Density, an anonymous people counting system that measures how many people use a given space in real-time. 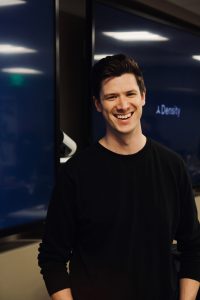 But back in 2008, Andrew was studying writing and rhetoric while programming text-based adventure games in his room.

“Technology is what I did on the side for fun,” he said. “It’s what I loved to do, but I didn’t realize it was something I could make a career out of.”

That changed in the spring of his junior year, when Andrew took a Photoshop class with Chris Kierkegaard in the basement of Hinds Hall.

He didn’t just enjoy learning to use Photoshop. He fell in love with it. So when Chris asked him to apply for an internship with SIDEARM Sports, a digital strategy company founded by iSchool professor Jeff Rubin, it was a no brainer.

At first, Andrew got rejected (he admitted that’s the way most of his success stories start). Not knowing what to do, he decided to stick around and work in Syracuse for the summer.

But then, two weeks before the start of the internship, one of the candidates dropped out — and Chris thought he might be a good fit.

“That totally changed my life,” Andrew said, “because I went on to learn how to become a professional web designer.”

It was there at SIDEARM Sports that Andrew’s life shifted from, in his words, a system of learning into actually becoming a professional. He wasn’t just a student anymore. He was a full-fledged professional, sharpening his skills and working for a company he loved.

That’s why the offer to enroll in a graduate program at the iSchool came as more of an existential dilemma than an exciting opportunity. Unsure of what to do or what he wanted to become, Andrew procrastinated on submitting his intent to accept until, finally, he made the decision on a whim.

“When you choose grad school, it’s usually because you want to pursue a master’s degree or Ph.D.,” he said. “For me, it was a decision to stay in this community I had fallen in love with.”

So at 4:00 pm on the day of the deadline, Andrew shrugged his shoulders, begrudgingly dropped his acceptance into the mailbox, and started the Information Management program.

“It was one of the best decisions of my life,” he remembers.

At the beginning of 2010, Andrew had been working at SIDEARM Sports for two years. When they wouldn’t give him a raise, he quit.

Some of Andrew’s friends pointed him toward a graduate assistantship headed up by Professor Bruce Kingma, designed for anyone who wanted to cultivate an entrepreneurial community in the local area.

Andrew applied, got the job, and used it to pay for an entire year of his education. But as his aspirations gained new direction and clarity, he shifted to follow a new path: starting his own company.

“When I told Jeff I wanted to [quit and] start a web design company of my own, he totally supported it!” Andrew remembers emphatically.

That process led him to a fellowship through the Kauffman Foundation, where he met the people who would become his co-founders and early investors, discovered the idea for what would become Density, and started to raise his first rounds of venture capital.

Now, six years later, Density is a fully venture-backed startup helping businesses safely reopen in the wake of COVID-19. Andrew says that, while the pandemic brings new and unique challenges to running a business, the thing that’s remained the same is extraordinary uncertainty.

“The best thing you can do is invest in the things you believe will not change,” Andrew said, citing an idea from Jeff Bezos.

For Andrew, that includes learning how to love to read, how to build a team, and how to develop the sort of enthusiasm about something that can infect others and carry you forward.

While “follow your passion” is all but standard advice embedded into American culture, Andrew actually prefers to say, “Follow your enthusiasm.”

“Enthusiasm is a generative form of energy. Where passion is sort of singular, enthusiasm is infectious,” he said.

He credits the latter as the centerpiece of any successful team-building process, whether it’s in the context of your family, your friend group, or your company.

Andrew says the best piece of advice he could give to someone standing where he was is to surround yourself with people who are enthusiastic about a common project or idea. The effect isn’t additive; it’s multiplicative.

“The only time you have is right now,” he said. “Fill it with something you’re enthusiastic about, share it with others, and it’s hard to go wrong.”

Editor’s Note: Andrew would like to take this space to thank the other five co-founders of Density. They are Robert Grazioli ’11 (iSchool), Brian Weinreich ’10 (Arts & Sciences), Steve VonDeak G’08 (Law), Ben Redfield ’12 (iSchool), and Jordan Messina.