Balancing a Career, Passion, and Research with a Doctorate of Professional Studies 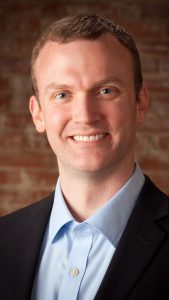 Doctorate of Professional Studies alum Jake Dolezal never set out to work in information management. He ended up in the field because of what he refers to as “one of the happy accidents of life.” He spent his childhood surrounded by information at a school library, where his mother worked as a librarian. Still, He didn’t consider how many more opportunities in the field there were until he got to college.

“I studied physics in college but had no idea what I wanted to do with that,” Dolezal said. “I spoke with one of my professors who told me I basically had two options: engineering or computer science. I knew engineering wasn’t for me, so I decided to try computer science.”

This leap of faith led Dolezal to his first job out of college at a company that manufactures construction equipment. Initially, he believed he would focus on computer science but ended up in an information management role. He started by cataloging parts for an engineering database, a simple position that kick-started his career down the data path.

This experience led him to one of his favorite jobs and the place that gave him his research topic for his doctoral program at the iSchool. From 2006 to 2014, Dolezal worked for the Choctaw Nation of Oklahoma as the Senior Director of Information Management. The tribe’s chief asked him to build a research group that would analyze data about the tribe, which included information about the quality of life, health care, social community activities, genealogy, and ancestry.

Dolezal loved working for the tribe, but it was also around this time in his life that he began to realize that his career was missing something: a doctorate.

“It had been an ambition of mine to get a doctorate degree since I was 16, but after I got my master’s degree, things changed, and I wanted a break from school,” Dolezal said. “Getting that doctoral degree was always on the back of my mind. Before joining the program, I was sort of regionally bound to Oklahoma, and I could see the world opening up to me by getting this degree.”

While Dolezal was ready to take the next step in his career, he didn’t want to put his life on hold to go back to school full time. He loved his job with the Choctaw Nation and had a family he didn’t want to uproot with a move across the country. That’s why the iSchool’s Doctorate of Professional studies was perfect for him. With a blend of online courses, independent study, and a short residential program, Dolezal made the program work on his own time.

Another massive benefit of the DPS program for Dolezal was that he integrated his work and research with the Choctaw Nation into his final thesis. His advisor was Michelle Kaarst-Brown, who did similar cultural research, so it was a perfect fit for the pair to work together on research about the culture of the tribe.

“My final research project was on technology and cultural beliefs within the tribe,” Dolezal said. “I got to focus on generational differences, and speak with elders of the tribe to hear their stories, while also learning how younger generations were integrating technology into their lifestyle.”

By 2013, however, Dolezal completed the program and was ready for a career change. After an organizational change within the tribe, combined with Dolezal’s desire to expand his career outside of the 150-mile radius he’s lived his whole life, he decided to pursue an opportunity elsewhere.

After getting mentoring and advice from several contacts within the DPS program alumni network, Dolezal eventually connected with William McKnight, the founder of McKnight Consulting, whom he cold-called and immediately got a job offer. Thus began Dolezal’s career shift into consulting, where he works with clients in strategy implementation and database management. To this day, Dolezal still works with the firm, though he now is in a more analytical role where he assesses and benchmarks emerging information management technologies.

“I don’t think I would have gotten this job and realized how important the field was if it wasn’t for the iSchool. Being part of the information management industry right when it exploded was really exciting,” Dolezal said. “My career really began when I started the DPS program.”

While Dolezal plans to continue his career in consulting using his knowledge and experience gained from the DPS program at the iSchool, he looks back fondly on the relationships he made there. He says that the relationships he formed with faculty and fellow members of his cohort due to the mentoring aspect have been one of the highlights of his career. Those relationships have carried on through the years since he completed the program.

“The DPS program changed my life, and I still feel very connected to the community,” Dolezal said. “My advice to anyone interested in the program is to just invest in those years because it will pay dividends for the rest of your career.”