An EMT With an Eye on Data Analytics

While stranded at home in the beginning of the pandemic, iSchool senior Emily Michaels spent her downtime founding a jewelry business with her sister, called “The Beading Project.” With this venture, they made and sold bracelets, and donated proceeds to a local food bank in Westchester, NY, which is where she grew up and was living until in-person classes resumed. 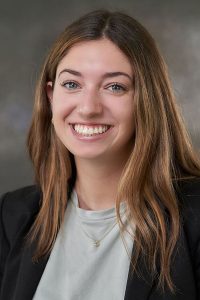 At first the sisters were mostly just selling to friends and family, and in the face of so much recent job loss, they were pleased to be helping provide a much-needed service to their community. But what started as a small-scale gesture, ended up serving as many as 2,500 meals through the Feeding Westchester food bank. They had made, sold, and shipped more than 300 bracelets. Much of that success was based on Michaels’s aptitude for building a website through an online shopping platform. The experience of being so fully absorbed in the process of web design helped confirm that she made the right choice to study at the iSchool.

Her mom was raised in Syracuse and Michaels felt a kinship with the city from an early age. Proudly stating that she is from an “Orange Family,” she mentions that they have been season ticket holders for many years, and she joined the college of Arts and Sciences with plans of becoming a doctor. She was excited to be attending Syracuse University and finally wearing orange with a new sense of pride.

Michaels started out as a pre-med major, but she soon learned that it wasn’t her calling. She enrolled in a few different classes outside of the pre-med curriculum. “My professors were really accessible and receptive when I was exploring the idea of majoring in the iSchool,” she states, so after her sophomore year, and plenty of due diligence on her part, she applied and was welcomed into the iSchool. Michaels is now pursuing her bachelor’s degree in Information Management and Technology with a concentration in Data Analytics. “My transition to the iSchool was so smooth. I could get into all of the classes that I wanted, I could fit it in my schedule, and I could make sure that I still graduated on time–which was really important to me,” says Michaels.

Demonstrating her academic commitment early, she earned the Invest in Success Scholarship after her first semester and fortunately it followed her as she made the transition into the iSchool. This was awarded for achieving a minimum 3.75 GPA in her first semester, and maintaining at least a 3.25 GPA each subsequent semester, when completing 15 or more credits. Michaels notes that, “the University gives you an extra scholarship for consistent academic work, which is really nice,” but it is also a testament to her commitment to her education.

“My experience would not be the same without the supportive professors who guided me on my path, specifically my research professor Steven Sawyer who helped me pursue academic writing and apply research methods to our project,” says Michaels. She describes how all of her professors at the iSchool have been invaluable in her academic pursuits. She also singles out Bruce Kingma, who taught a class on business communications that focused on teaching interviewing and networking skills. According to Michaels, these were “the most important tools for successfully landing an internship.”

For her honors thesis, she is working with Professor Sawyer of the iSchool, and a group of students from Skidmore College, as they study freelance work and the online labor market by looking at users of the platform Upwork.com. The platform connects workers with employers across many industries, allowing them to find each other, communicate, and even perform work through the site. The study, which focuses on how the online labor market works, started before the pandemic and has continued straight through, and she notes how interesting it has been to see the changes happening in real-time as a significant fraction of the world’s workforce move to strictly online work settings.

“My experience would not be the same without the supportive professors who guided me on my path.”

Michaels’ thesis is focused on gender differences in the online labor market. Specifically, she says, “how men and women vary in their online presentation, how they cater their profiles for different jobs, and how wages vary by positions and gender. How their household arrangements influence the flexibility of their work or how their physical workspace has changed throughout the pandemic.”

The solitude of academic work and the social constraints of the pandemic leave Michaels feeling grateful for the social nature of work that her thesis requires. “It’s nice to do research and actually work and connect with people,” Michaels says as she is working to wrap up the research side of the project, and get on to writing the paper, which she intends to submit in time to graduate this spring.

Michaels also works as an EMT, and as an Emergency Medical Dispatcher/Trainer, for Syracuse University Ambulance. She originally got involved with this group when she started school on a pre-med track, but has stuck with it even though she made the academic transition to information and technology. When talking about the EMT certifications that she needs for this job, which require lengthy re-certifications every three years, she says, “Even though I won’t be going into that field, it teaches you a lot about leadership and communication, really fast problem solving and decision making, and stress management.”

Michaels has had many great experiences, both personal and professional, during her time in college. Armed with the knowledge that technology will be the future of work, she is exceedingly happy with her choice to study at the iSchool, and to be doing her thesis on such a timely subject that will help her navigate her own rapidly unfolding career path. Michaels states, “the iSchool is so supportive, and the professors are so interesting to work with. They add so much to the education just by teaching from experience, and programs like this don’t exist in a lot of other places.”