A Q&A with Carsten Øesterlund 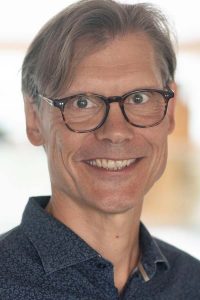 Carsten Øesterlund’s work focuses on the organization, creation, and general use of documents in the environments of people that live and work in highly mobile and fast-paced environments. His particular interests orbit around how social and material structures facilitate distributed work, play, and learning. Most of his research utilizes data from citizen science, crowdsourcing, healthcare sources, distributed science teams, game design, and FinTech. The first question is an unhittable slow-pitch because it is the fundamental question that has fueled his entire professional career, and is a quote from his own iSchool professor profile page.

Question: How do people use documents to manage their movements and interactions in time and space?

Answer: [Laughs] – do you really want an answer to that?

Q: Not for this piece, but hopefully we can touch on that later. How did you wind up teaching at the iSchool?

A: So, I have a kind of interdisciplinary background. I have my master’s in psychology, and a lot of classes in anthropology, science, and technology studies, but then I have my PhD in management from MIT. When I was done with my PhD, I did not want to go to business school, because I would have had to focus purely on organizational studies – which was more the social, or information systems – which was more on the technical side. The iSchool allowed me to look at both the social and the technical sides, and how they belong together. That was why I was attracted to the iSchool.

Q: So you grew up in Denmark, did you attend school through your bachelor’s there?

A: I went for my bachelor’s there, and then as part of my master’s I was a Fullbright Scholar at UC Berkeley. After that I went to MIT, and then Syracuse.

Q: What kind of projects have you been working on at the iSchool? Anything you would like to highlight over the time that you’ve been there?

A: I think that two current ones would be good:

A long-term one is with my colleague Kevin Crowston. We study citizen science, where you involve the broader population in doing research. We particularly worked with a site called Zooniverse. The last 7-8 years we have worked with app producers to develop and run a project called Gravity Spy, where we help detect gravitational waves. Our angle on it is that the volunteers help clean the data by training a machine learning unit to find mistakes in the data, because these detectors are so sensitive that they produce a lot of noise, and the machine learning AI is not good enough to find it in itself, so it needs training. So we have had to devise a project where anybody could come in and help train the machine learning. Which means that they had to learn and the machine had to learn. So the big challenge for us was how can we interweave machine learning and human learning so that they are both being pushed forward. We just got new funding from NSF to extend the project, and to date we’ve had more than 20k volunteers participate.

Another one that has just started is with colleagues from Copenhagen, Denmark. Where we’ve got money to help FinTech companies, which are financial startups, to collaborate on doing ESG reporting, which is this new environmental, social, and governance reporting. The EU has new policies for how much energy you use, what is your environmental impact, how much do you pollute, what is your social setting in terms of diversity, and how is that within the organization. And other issues like that. The problem with all of these small startups is that they don’t have the capacity to do that themselves. Neither the managing, gathering, or crunching of the data. So, we’re trying to develop this co-op model where they pool their resources and their data, so that we can see if smaller entities can join forces so that they can compete with large companies.

Q: In regards to the first project you mentioned, that sounds like a lot of data collecting, does the scope of the project go well beyond that?

A: Actually, both of them have design aspects to them. We built the citizen science project on the platform, and designed the interface. So, in that sense there was a design element in it. Also with the FinTech project we are gathering data, but we are also trying to make an intervention by creating this co-op, so that is also a design element. I have another project with a colleague, Ingrid Erickson, where we look at how AI is shaping healthcare. That one is much more straight data gathering by interviewing healthcare professionals about how they use AI.

Q: How do you integrate your research into your approach to teaching, or vice versa?

Q: What do you think is required from a good researcher?

A: Ohh, that’s a big question. I think a lot of stuff. There’s obviously curiosity. You also have to be organized, to keep things moving forward, and in the end you are an author. Where a lot of people struggle, you have to put it into writing, and get it out, that is often the painful part. You can make all these interesting findings, but putting them into articles or book format is really hard work. So, you’re also an author.

Q: Any highlights of your career so far? Anything that you would like to revisit?

A: The GravitySpy project is something that I have really enjoyed doing. That project was my first design oriented project. Before that I had mainly done data gathering. But designing and seeing how it is used, and being able to shape it so that you can better understand certain elements, has been super interesting. Also, the number of people that you can reach is really exciting. For most research papers, you can count on two hands how many people you have reached, but with this, the reach is enormous.

Q: I noticed in one of your bio’s that you are into sailing. Do you get to do that much these days?

A: Yes! But not up here very much. In Denmark it’s all sea, so I have sailed bigger boats over there.

Q: Any next steps for your current projects, or new projects on the horizon?

A: Nothing brand new, so it’s more continuing the projects that we have going. We just got funded for several of these projects, so in a sense it’s just extending these. We just started the Future of Work Center at the iSchool, which I expect will expand and develop, both in terms of research, but also in terms of teaching.