Evin Floyd Robinson ’12, G’14 and Jessica Santana ’11, G’13, co-founders of America on Tech, will deliver the keynote address at the 2022 Convocation Ceremonies for the School of Information Studies, to be held May 14th at Goldstein Auditorium in the Schine Student Center. 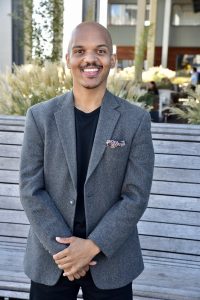 Evin Floyd Robinson ’12, G’14 is one of the co-founders and President of America On Tech (AOT), an organization on a mission to decrease the racial wealth gap in underestimated communities by creating pathways into degrees and careers in technology. AOT’s goal is to prepare the next generation of technology leaders and has offices in NYC, LA, Miami and expanding.

Robinson has been recognized as an American Express Leadership Fellow, Pahara Institute – NextGen Fellow, Forbes Under 30 Lister, NY City & State Tech Honoree, Black Enterprise Modern Man, Wells Fargo Millennial Activist, and an inaugural Robin Hood Foundation’s Power Fund leader. Robinson served on the inaugural Forbes Under 30 Board of Directors and held the role of North East Impact Chair. He is also a Founding Member of Forbes Forum and currently hosts a tech segment on For(bes) the Culture a division of Forbes.

While at SU, Robinson became a member of Alpha Phi Alpha Fraternity, Inc, served as Co-President of the Entrepreneurial Living-Learning Community, President of HEOP and SSS Student Advisory Board, was a Kauffman Entrepreneurship Engagement Fellow, and started a scholarship to support entrepreneurs on campus. Robinson received the Generation Orange Award at Orange Central and served as a Convocation speaker for the college of VPA.

Prior to AOT, Robinson worked at Accenture as a technology consultant. Robinson has been invited to present at SXSW EDU, The Grace Hopper Celebration, Bloomberg, FactSet, BNY Mellon, and other leading organizations. Robinson’s work has been featured on CNN, Blavity, BET, PBS, Cheddar, and other media outlets. He graduated from Syracuse University with degrees in Information Management, Economics, Communication Rhetorical Studies, and completed his Executive Education in Social Entrepreneurship at Stanford University’s Graduate School of Business. 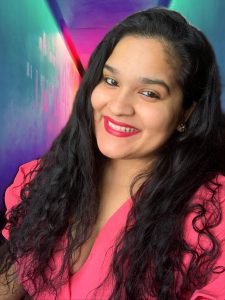 Jessica Santana ’11, G’13 is one of the co-founders and CEO of America On Tech (AOT), an organization on a mission to decrease the racial wealth gap in underestimated communities by creating pathways into degrees and careers in technology. AOT provides students with access to the development, mentoring, networking and professional experiences that prepare them for degrees and careers in technology. Their work has been featured in major media outlets such as Forbes, CNN, Wells Fargo, Sirius XM Radio, Huffington Post, TechCrunch, BET, Black Enterprise, AlleyWatch and The Network Journal. AOT has offices in NY and LA.

Prior to AOT, Santana worked as a technology consultant for global brands such as Accenture and Deloitte. She has been named an Inaugural Leader to the Robin Hood Foundation’s Power Fund, Forbes 30 Under 30 list, Crain’s NY 40 Under 40 list and New York Nonprofit Media’s 40 Under 40 Rising Stars list. In 2020, Causeartist named her 1 of 37 Social Entrepreneurs to watch and EdLoC named her a Compass Leader in Ending Generational Poverty. For her work during COVID-19, Jessica was named a 2020 Brooklyn Hero by City and State NY and Council of Urban Professionals 2020 Inaugural Technology Catalyst Award.

She has presented and spoken to over 100+ different audiences that include SXSW Edu, TechCrunch, Google for Entrepreneurs, White House, Thomson Reuters and Bloomberg. Her commitment to philanthropy and community engagement is evidenced by her world travels and work in parts of Europe, China and South America to work with nonprofits, private companies and social enterprises that better local communities and economies. She graduated with degrees in Accounting and Information Technology from Syracuse University and completed her Executive Education at Columbia Business School.

All graduating students and their families are invited to attend the iSchool Convocation Ceremony. Syracuse University Commencement will be held May 15. For the most current information about Commencement weekend, visit commencement.syr.edu.